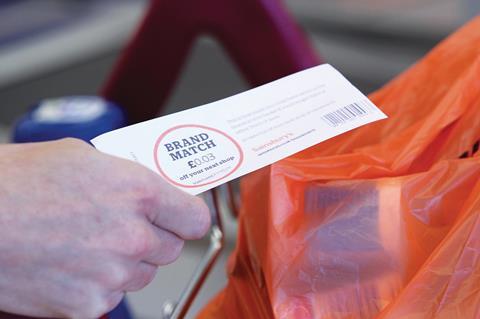 King, speaking as Sainsbury’s reported underlying first-half profits up 5.4% to £373m, said: “On a sales front we are well ahead of our competition.

“A year ago, there was a lot of nip and tuck [between the grocers], but in recent times there has been a real divergence.”

Sainsbury’s recorded total sales up 4.1% to £13.4bn and like-for-likes ahead 1.7%, including VAT and excluding fuel.

By comparison, Tesco reported last month that first-half like-for-like sales, including VAT and excluding fuel, slipped 0.6% although performance improved in the second quarter, edging up 0.2%.

King said Sainsbury’s ‘Live Well For Less’ proposition had resonated with customers. Its own label in particular offered shoppers “quality but savings versus brands”, he said. The grocer’s Brand Match initiative has also gone down well.

King said Sainsbury’s has also benefited from “a year like no other”, which included the Jubilee celebrations and Sainsbury’s sponsorship of the Paralympics.

Sainsbury’s share of the grocery market is its highest for almost a decade at 16.7%.

King said own-label growth reflected investment. According to Kantar Worldpanel, for the 28 weeks to September 30, Sainsbury’s year-on-year growth of own-brand sales is 4% against an average 1.6%. The grocer is 85% of the way through the relaunch of its ‘By Sainsbury’s’ range, which will be completed by April. King said that while customer confidence remains low, shoppers will splash out for Christmas but rein in January spending. “Christmas will be about quality food, and we expect own-label, particularly Taste the Difference, to do well, but customers will balance the books in January.”

King, who denied he is to resign from the grocer in the next year following speculation he might be in line to run Formula 1, said he would like to see a focus on jobs in the Chancellor’s Autumn Statement.

He said a 12-month National Insurance holiday for employers on new positions created would be “a real incentive for job creation”.

Sainsbury’s convenience store business showed almost 20% year-on-year growth and it opened 49 stores in the first half, taking the total to 487. Online sales were up more than 20%.