Retail Diary: Price is wrong at Amazon and Costco cashes in on coffins

The price is wrong at Amazon

Grocers are struggling to make their online propositions as profitable as their bricks-and-mortar operations, but etail giant Amazon may have accidentally stumbled across a novel solution.

The online titan appeared to kick-start its partnership with Morrisons this week as a host of fresh grocery ranges supplied by the supermarket giant appeared on its website – but a clutch of items were listed with inflated prices.

That’s one way to boost under-pressure margins – but how much of the cut would milk farmers be given?

Costco does a dead good deal

Costco’s Australian stores are bringing a whole new meaning to the phrase ‘death of the high street’.

The supermarket giant has started selling burial caskets and coffins in its stores Down Under.

Priced between £183 and £1,939, the caskets have been added to Costco’s Australian product offer after selling well Stateside.

Costco’s local general manager Patrick Noone said: “We’re always looking for business we can leverage here in Australia, and we took a look and thought that this market could probably do with some more competition.”

It looks like the fight for sales among supermarkets isn’t going to die down any time soon.

A biscuit for all occasions

Retailers are constantly striving to create innovative in-store visual merchandising – but this one really takes the biscuit.

A convenience store near Retail Week Towers hasn’t crumbled under the pressure of local supermarkets. It is keeping things low-key by organising its sweet and savoury snacks into four quintessentially British categories, including ‘Everyday biscuits’ and ‘Biscuits for meetings’. 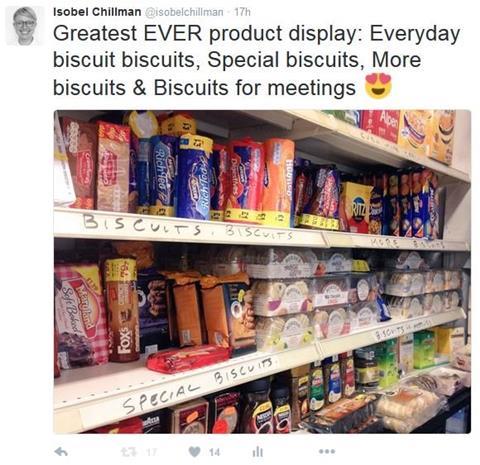 When Retail Week’s Isobel Chillman complemented the display and purchased a packet of Hobnobs, the shop assistant said: “Classic. Although you’re clearly not trying to impress anyone today.”