Retail Diary: Aldi gets its five-a-day and Nigel Oddy gets the X-Factor

Aldi is getting its five-a-day fix in preparation for the Olympic Games and Nidel Oddy has taken to the stage with X-Factor’s Stacey Solomon.

It’s not every boss who would take to the stage with X-Factor’s Stacey Solomon, but Nigel Oddy made an exception at House of Fraser’s charity ball.

Chief executive Oddy shimmied from the cocktail bar, at which he was whipping up concoctions for guests, to the dancefloor at Solomon’s request.

He then lent his dulcet tones to a duet, to the delight of guests including Coronation Street’s Jack P Shepherd – who plays long-time character David Platt in the soap – and was in attendance to auction off a Corrie tour for House of Fraser’s chosen charities, Sparks and Swan UK.

Oddy’s charms were also in evidence at the auction: his company during a round of golf raised thousands. The lucky bidder will surely be hoping for another rendition when Oddy takes to the links.

As the countdown to the Rio 2016 Olympic Games continues, Aldi has swapped checkouts for collages to mark the occasion.

The discounter, which is sponsoring Great Britain’s athletes until the Tokyo Games in 2020, recreated the famous Rio de Janeiro skyline using an array of colourful fruit and vegetables.

The iconic Christ the Redeemer statue is formed of bananas and slices of yellow pepper, mountains have been created from pineapples, avocados, marrows and broccoli, while slices of red onion depict birds flying in a blueberry-laden sky. 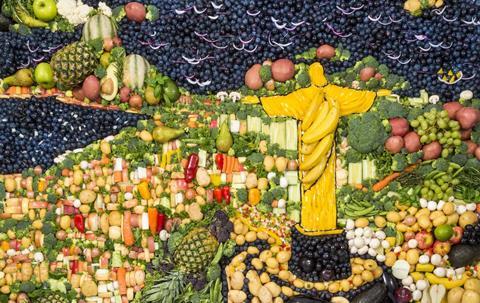 Should’ve got it trademarked

The high-street optician Specsavers is taking extreme measures to protect its advertising catchphrase and has filled a trademark application with the UK Intellectual Property Office.

Presumably to cut down on the eye tests its advertising bods will have to attend, the retailer is only asking for the word ‘should’ve’ to be patented and leaving the ‘… gone to Specsavers’ for all and sundry to recycle as they see fit.

The likelihood of Specsavers being able to trademark the word ‘should’ve’ alone is not yet known, with some trademark specialists saying the optician would have been more likely to have its application approved if it had applied to have the whole ‘Should’ve gone to Specsavers’ catchphrase patented.