Opinion: Hotel Chocolat is brewing a recipe for success

The Alternative Investment Market (AIM) has proven a hotbed for rapidly growing retailers in the UK since its formation just over 20 years ago.

Majestic Wine’s admission to AIM in 1996, Asos’ 2001 float and Conviviality’s 2013 IPO have blazed a trail for retailers hoping to use the market as a foundation on which to build bigger and better businesses.

Having launched a fruitful IPO of its own in May of last year, Hotel Chocolat appears well set to taste similar success.

“These are figures that, in a turbulent retail market characterised by rising costs, fragile consumer confidence and political uncertainty, deserve acclaim”

It was a sweet start to life at the helm of a public company for co-founders Angus Thirlwell and Peter Harris – and although its share price may have stuttered after hitting a high of 390p in the spring, the business itself has gone from strength to strength.

The results of its first whole financial year since listing, due out on Wednesday, should serve to underscore the robustness of its current performance, the potential room for further growth and its attractiveness to investors.

Half-year pre-tax profit spiked 28% to £11.2m in the 26 weeks to December 25, while sales in the shorter golden quarter period jumped 14.6% on a constant currency basis.

In July, the retailer revealed that full-year sales had advanced 12% to £104m, which was “slightly ahead of market expectations” – a performance that is due to be translated into profit growth when Hotel Chocolat publishes preliminary results. 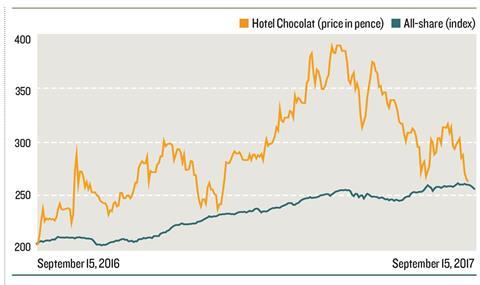 These are figures that, in a turbulent retail market characterised by rising costs, fragile consumer confidence and political uncertainty, deserve acclaim.

Yet Thirlwell and Harris, far from counting the beans and jetting off into the sunset at their Boutique Boucan Hotel in St Lucia, are continuing to drive the growth agenda.

In the UK alone, where it operates more than 90 stores, Hotel Chocolat has plenty of headroom to expand into.

Its shop-café format has impressed in high footfall locations and its roll-out continues to pick up pace, while retail parks present a further sizeable opportunity.

But its float has also provided the financial firepower and confidence boost required to re-examine overseas operations.

“In the UK alone, where it operates more than 90 stores, Hotel Chocolat has plenty of headroom to expand into”

The retailer will open its first Irish store in Dundrum town centre, Dublin, and its strategy to get “match-fit” for international expansion by honing its skills in Denmark appears to be paying off.

After Hotel Chocolat retrenched from the US following an ill-fated first move outside of Europe, it now plans to launch a small chain of stores in Hong Kong as it lays the foundations for an Asian business.

Having seen the popularity of the brand among Asian tourists in London, Thirlwell believes its Hong Kong debut marks “the beginning of what will be potentially a huge market”.

With further stores in Europe and a second crack at the US surely tickling chief executive Thirlwell’s tastebuds too, the ingredients should create a recipe for Hotel Chocolat’s success.