Supermarket giant Morrisons is testing a new fascia as boss David Potts ramps up his bid to rejuvenate the embattled grocer. 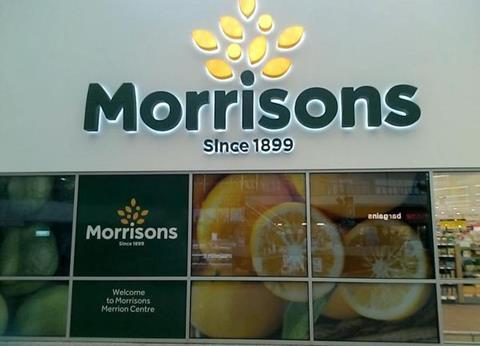 The new logo features an upper-case M with lower-case lettering, a move away from its current format of all capital letters.

Yellow shapes, resembling leaves, have been added above the middle ‘I’, seemingly to create a tree.

The year Morrisons was founded, 1899, has also been added to the logo, which was put in place at the grocer’s recently refurbished Merrion Centre supermarket in Leeds on Monday.

The fascia was highlighted on Twitter by Steve Porter’s @Retailsnoop account just days after Morrisons reported a 35% fall in first-half profits and revealed plans to shutter 11 more stores, putting up to 900 jobs at risk.

A Morrisons spokesman told Retail Week there were no plans in place at this stage to roll the logo out to more stores.

The spokesman added: “Our recently relaunched Merrion Centre store features a variation of the Morrisons logo. We are constantly listening to customers to ensure that we reflect their changing needs and what makes Morrisons better and different.

“Every part of our offer is looked at through the customers’ eyes and this applies to the way we present our stores.”