Waitrose is to feature a ‘mini Heston Blumenthal’ in its new TV advertising campaign. 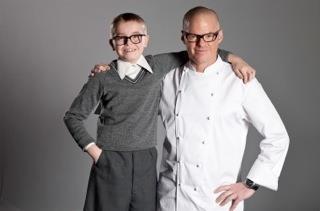 The Easter campaign, which starts tomorrow, shows a nostalgic Blumenthal reminiscing about his childhood as we see a flashback to the 1970s where a ‘mini’ Heston is sat at his dining room table enjoying a hot cross bun.

Haydon Gill, aged 10, from Romford, Essex, has been chosen from hundreds of children to play the young incarnation of Blumenthal in the 30 second ad.

It seems that ‘mini’ Heston has a great deal in common with his co-star, as Haydon is a budding chef with a taste for unusual combinations of flavours, just like his lookalike.

Gill claims his favourite food is fish fingers and custard as Dr Who eats it. “I like weird combinations of food. My perfect hot cross bun flavour combination would be chocolate and Parmesan. I love strong cheese. Maybe Heston could make one for me,” he said

“I have loads in common with Heston - our birthdays are a day apart, we have the same phone and he wears glasses like me. I also cook with my Nan a lot- we make roast dinners with Yorkshire puddings from scratch. I also have made my own recipes- one called Tick Tock Tucker and one called Sunset Surprise. I like making food look fun,” Gill added.