McColl’s has posted a drop in full-year profits after the acquisition of almost 300 Co-op stores weighed on its bottom line. 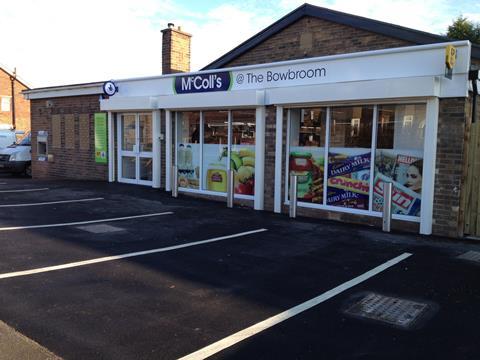 McColl’s said same-store sales in its premium convenience and food and wine shops decreased 1% across the year, while like-for-likes in newsagents and standard convenience stores fell at the quicker rate of 3.3%.

But like-for-likes in stores that had been recently acquired or converted rose 0.8%.

Despite falling like-for-likes, McColl’s said it had grown gross margin by 70 basis points to 25.1% after growing its convenience ranges to include more fresh groceries and food to go options.

McColl’s said it was “on track” with its integration of 298 Co-op stores, after it was given the green light by the competition authorities to acquire the shops last December.

The retailer unveiled the results as it revealed that Angus Porter would take on the role of chairman from April 27, when former chief executive James Lancaster will step down from the position.

Lancaster will remain on the board as a non-executive director.

McColl’s boss Jonathan Miller, who succeeded Lancaster at the helm last April, said 2016 was “a pivotal year” for the business, which “laid the foundations to deliver significant growth in the years ahead”.

Miller added: “We are pleased to have recorded our sixth successive year of revenue growth and to have met our target of operating 1,000 convenience stores, which truly marks the completion of our journey to become first and foremost a convenience business.

“Our transformational acquisition of 298 quality convenience stores from the Co-op substantially accelerates our growth strategy and expands our neighbourhood presence for the benefit of our customers.

“We have a long history and proven track record of successfully integrating convenience stores into our estate, and are encouraged by the progress we have made in converting the stores so far.”