Hotel Chocolat is poised to launch a new-look website in a bid to ramp up its expansion plans and build on its “best Christmas ever.”

Founder and boss Angus Thirlwell said the retailer enjoyed “double digit” like-for-like growth of “less than 18% and more than 10%” in its stores over the festive period. 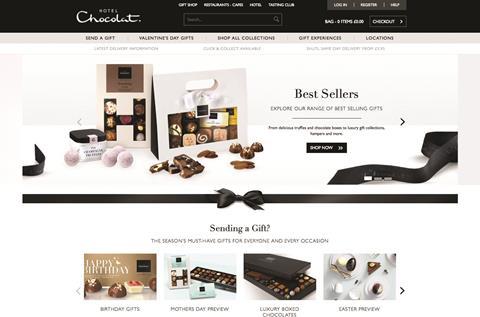 Hotel Chocolat is poised to launch a new-look website in a bid to ramp up its international expansion plans and build on its “best Christmas ever.”

Total sales, including its online business and Tasting Club, grew 18.4% in the four weeks to the start of January.

Thirlwell said the figures were driven by an enhanced product offer and “much improved availability” as the retailer “came of age” as a vertically integrated business.

He said those two factors combined to make Hotel Chocolat a “true gifts destination” for customers over Christmas.

Thirlwell told Retail Week that around 25% of sales were made online during the period and said that figure could reach 40% in the coming years as the retailer targets further expansion into overseas markets.

Hotel Chocolat will launch its revamped ecommerce platform by “the middle of the year”, which will allow it to reach out to new regions across the globe, starting with Scandinavia.

The chocolatier already has three stores in the Danish capital, Copenhagen, but Thirlwell said Hotel Chocolat will use the region as a “training ground to get match fit” for further international expansion.

He told Retail Week: “The new website has been a year in the design and it will enable us to add a lot more functionality and interaction between our different channels.

“It will be much easier for our customers to shop it and will have some interesting capabilities that reinforce our position as a one-stop gift shop.

“One of the big advantages of the new platform is that we can, at quite reasonable cost, get websites up for different international markets. With our existing site it is very cumbersome, long and consequently costly to even think about trading online in different countries.

“This will open up new opportunities for us to build particularly on the bridgehead we have made into Scandinavia. We will use the Danish market, which is a small, affluent, but challenging market, as our training ground to get match fit to do international really well, before we take on a larger market.”

Thirlwell refused to reveal the other markets on Hotel Chocolat’s hit list, but said there were “a number of other countries where we think an online offer would go well.” He hinted that “virtually any advanced economy” would be on the retailer’s radar.

“The biggest challenge we’ve got is identifying which countries are not suitable, rather than which ones could be”

“The biggest challenge we’ve got is identifying which countries are not suitable, rather than which ones could be,” Thirlwell added.

“We’re not about to throw the baby out with the bathwater and do anything too radical, but it’s about strengthening, stretching, improving and staying ahead of the curve in digital.

“We already have a strong website that’s delivered amazing results over the Christmas period, but you always have to get your next site ready when the existing one is peaking.”