Grocery sales to record first full-year decline for a decade

Grocery sales have fallen for the third consecutive month as Nielsen predicts the first sales decline across a calendar year for a decade. 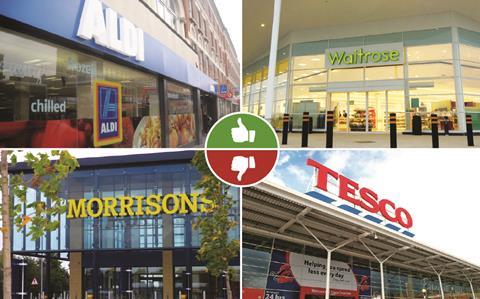 Sales during the four weeks ending November decreased by 0.9% year on year, while sales volumes dipped by 1.2%, according to Nielsen figures.

Nielsen forecasts there will be an overall decline in sales from £146bn in 2013 to £145bn this year.

Nielsen first reported a contraction of the UK grocery market in January 2014 and since then sales have declined for nine out of the 11 subsequent months.

In comparison, data from Kantar Worldpanel released earlier this week claims the grocery market fell into decline for the first time since its records began in 1994 as sales slid 0.2% year on year in the 12 weeks to November 9.

Nielsen’s UK head of retailer and business insight Mike Watkins said: “It’s been a bad year for the big four supermarkets and they enter the key Christmas trading period with sales growths much weaker than 12 months ago.

“Much of this has been put down to the discounters, who are gaining share fast, but it’s the needs and expectations of shoppers that have been changing – and some of the supermarkets simply haven’t adapted quickly enough.”

Nielsen forecasts a drop of between 0.5 and 1% for grocery sales during the final quarter of 2014 compared with a year ago.

Watkins added: “We expect online grocery sales to continue to grow significantly ahead of other

“Aldi and Lidl are maintaining their stellar growth and look set for another increase in market share in December, together with Waitrose. For all three, sales growths continue to be driven by new shoppers.”