Britain’s supermarket giants have rallied to help deliver essential supplies to families affected by flash floods in the northwest of England.

High-speed winds and heavy rain battered Cumbria over the weekend and dozens of people were evacuated from their homes as flash flooding swept through parts of the region. 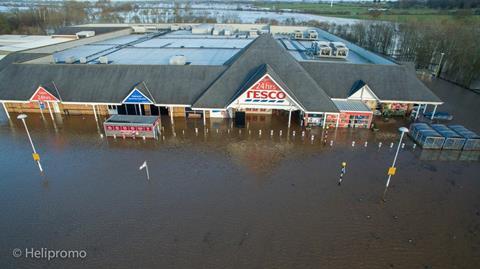 Police declared Storm Desmond a “major incident” as train routes were cancelled and roads closed, while schools and hospital services have also been disrupted.

Some areas completely cut off by the floods have been unable to get hold of essential supplies – such as bottled water and baby food – and grocery retailers have leapt into action to lend a hand to the affected communities.

The supermarket giant was forced to close one of its 24-hour Extra stores in Cumbria after it was left submerged in water in the aftermath of Storm Desmond.

Its Tesco News Twitter account tweeted this morning: “Clean up starts today. Tesco colleagues out in full force to help local communities and reopen store”, alongside a video of the flooded site.

A spokesman for the grocer added: “We’re extremely proud of our colleagues’ efforts to keep stores stocked and to help those who have been affected by the floods.

“We are donating food and essentials to crisis centres and community groups and our colleagues have been working over the weekend to help those who need it.

“We’ll continue to do our bit to help over the coming days and are doing our best to minimise the impact on local communities in the run up to Christmas.”

Big four rival Morrisons, which was forced to close its Morecambe store at the weekend due to a power cut caused by the storm, has also had trucks on the road delivering groceries to “most” of the affected areas via rescue centres that have been set up by emergency services.

Sainsbury’s closed stores in Carlisle, Lancaster and Peny Street after damage was caused by the storm. A spokeswoman said the retailer was “assessing the impact before re-opening.”

The spokeswoman added: “We are supporting the local community where we can and apologise for the inconvenience.”

Around 2,500 properties remain flooded in Carlisle alone and almost 50 severe flood warnings, which indicate a danger to life, remain in place across the north of England today.