Grocery sales growth fell for the third consecutive month and for the sixth time in seven months as discounters’ influence strengthens. 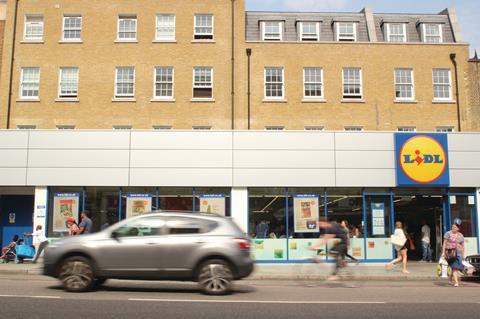 Consumers spent 3% less money during the four weeks ending July 19 compared to the same period a year ago as volume dropped by 3.5%, according to Nielsen data.

“The grocery sector has been hit by a triple whammy,” says Nielsen UK head of retailer and business insight Mike Watkins. “Food inflation has hit a record low of 0.6% while more of people’s shopping is being done at the discounters, which means less money going through the tills, overall.

“The bad news is compounded with this trading period being unable to compete with the strong sales during last year’s early July heatwave when sales were boosted by 6%.”

Discounters now account for £1 in every £11 spent in UK supermarkets with Aldi and Lidl now making up 5.2% and 3.8% of the total market respectively.

Both Aldi and Lidl continue to outperform the market with sales increases of 25% and 17% respectively for the 12 weeks to July 19.

Watkins added: “The next major battle ground is fresh food, a traditional strength of the major food retailers. The discounters have been very effective at stealing share for packaged goods – such as cans, packets and bottles.

“If they can also eat into fresh foods, which account for almost half of food and drink sales, we could see a seismic shift in the sector over the next six months, particularly as fresh food raises the overall store image, in effect, a double benefit.”