Asda was again the only one of the big four grocers to grow its share in recent weeks, while Lidl achieved its highest ever growth. 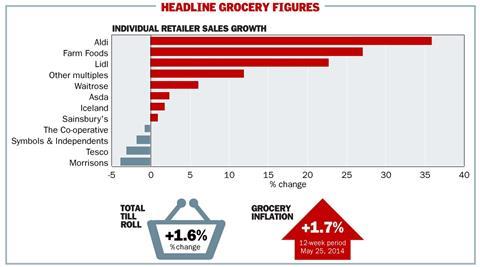 In the 12 weeks to May 25, Asda’s share increased from 17% to 17.1%, while Aldi, Lidl and Waitrose continued to grow their share in the tough market, according to data from Kantar.

The growth in the overall grocery market slowed down to just 1.7%, the lowest level in 11 years, with the exception of the March 2014 12-week ending period, which was affected by the late-falling of Easter this year.

Lidl achieved its highest ever market share growth, up from 3% to 3.6% year on year. Aldi’s share remained flat compared to the previous period, at 4.7%. However, this represents a 35.9% increase on last year.

“At Waitrose, managing director Mark Price’s tactic of being “everything that the discounters aren’t” seems to have paid off for the retailer. By differentiating its offer, Waitrose has maintained its all-time record share of 5.1% secured last period. Meanwhile, Asda surpassed its rivals with a market-beating growth of 2.4%, lifting market share to 17.1%, compared with 17% a year ago. Asda is the only large grocer to grow share year-on-year”.

Supermarket price competition prompted another drop in the level of grocery price inflation to 1.2%.