Aldi sales densities soar as it outpaces the big grocers

Aldi’s sales densities have more than doubled since 2010 and the discounter has outstripped rivals among the big four. 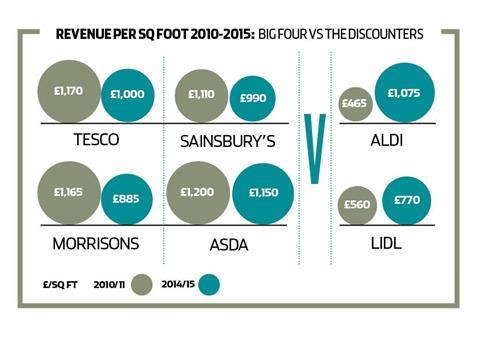 The findings came as the German grocer this week overtook Waitrose to become the sixth largest supermarket in the UK. It marked a meteoric rise for Aldi, which has gained ground at the expense of the big four.

Sales densities are a critical measure of store productivity and Aldi’s rise shows its success is not simply the result of adding space.

Retail Week analyst Philip Wiggenraad said: “The extent of Aldi’s improvement has been remarkable. Significant like-for-like sales growth has had a direct impact on its sales densities.”

But he acknowledged: “Aldi was coming from a low base. Four years ago it was not living up to its full potential like it is today.”

An Aldi spokesman said: “More people than ever are choosing to shop at Aldi. Our shoppers know they can buy their full weekly shop at Aldi.”

Tesco does not report its full-year results until later this month, but Retail Week estimated

Wiggenraad said: “You would expect densities in stores to have been on a downward trend at the big four as online sales increase. However, the considerable declines experienced by Tesco and Morrisons reflect the recent underperformance of these businesses as well as the structural changes taking place in the sector.”

An Asda spokeswoman maintained: “We’re focused on making sure our stores offer the best proposition for our customers and these figures back up this approach.”

According to Kantar figures released this week Aldi’s market share increased to 5.3% in the 12 weeks to March 29, overtaking Waitrose, whose share grew to 5.1%.