WHSmith is trialling opening its new value greetings card fascia Cardmarket within existing WHSmith stores as it looks to take on budget rivals. 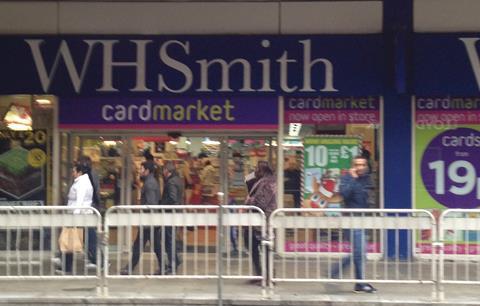 The retailer has launched dual-branded fascias at existing WHSmith stores in Wood Green, London (pictured) and Nottingham’s Victoria Centre. Inside, both branches have dedicated Cardmarket areas.

It is understood that there will be a total of five dual-branded WHSmith and Cardmarket stores by the end of January.

WHSmith revealed in October that it had launched a new store concept called Cardmarket that would be tested in secondary locations, with 20 shops set to open before Christmas in towns such as Swindon, Slough, Watford and Gloucester.

In a comment piece for Retail Week in October, independent retail analyst Nick Bubb said: “The success of Card Factory has shown that the discount card market is attractive, so WHSmith should be able to carve out a slice of this pie for itself.”