Online titan Amazon has appointed China boss Doug Gurr to take the helm of its UK business – and he’s not a man afraid of a fight.

The etail heavyweight previously worked for Asda and his appointment has revved up speculation that Amazon’s attack on the grocery sector will be imminent.

Outside the retail arena, Gurr is an intrepid explorer, has completed a dozen Ironman triathalons and is even rumoured to have fought off a polar bear on one of his Arctic expeditions.

Tesco boss Dave Lewis’s efforts to win back customers seem to be paying dividends in the UK, and a similar turnaround is taking place in its foreign markets.

And if this image is anything to go by, the grocer is succeeding in attracting an entirely different type of customer in mainland Europe.

The supermarket giant’s Tesco News Twitter feed posted this image of a zebra strolling into one of its stores in Hungary as bemused passers-by captured the moment on their phones.

Presumably, the zebra just wanted to tuck into some of Tesco’s new Farms brands.

In an impressive move by one store manager to make shopping easier for customers with autism, an Asda Living store in Cheetham Hill, Manchester, is introducing a silent hour every Saturday.

Escalators will be stopped and in-store music turned down “to give these customers a better shopping experience and make them comfortable”, store manager Simon Lea said.

Lea decided to launch the quiet hour after seeing a boy with autism struggling to cope on the shop floor.

He said it will be so quiet customers will be “able to hear a pin drop”.

An Asda spokesperson said the grocer will monitor the feedback from the trial to see if it can be introduced elsewhere.

National Autistic Society head of campaigns Tom Madders said: “Asda’s initiative is a great example of an organisation taking the trouble to understand how autistic people experience the world, and we hope other retailers are inspired to follow their example.” 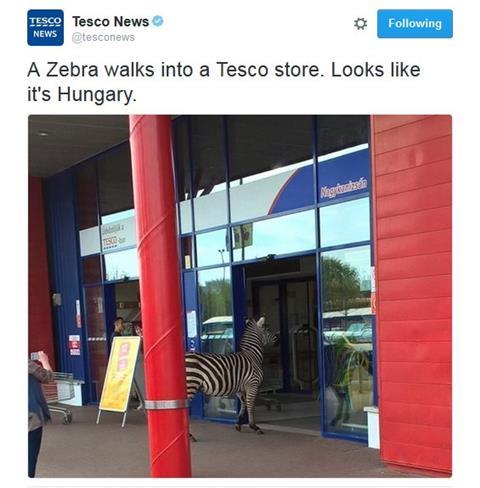