Pets at Home has recorded an increase in sales and profits in its first half as the retailer invested in its customer proposition. 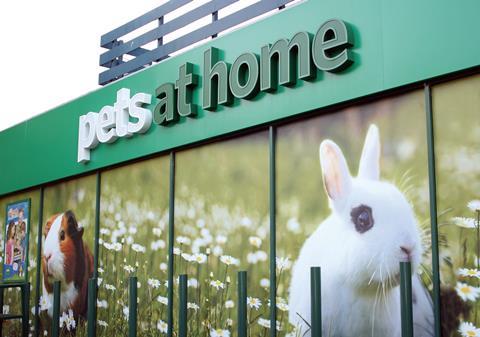 Pets at Home sales and profits increased in its first half as it invested in its customer proposition.

EBITDA was up 5.1% to £60.7m but the retailer said margin growth would be under pressure in the full year to 2017 due to a forecast £2m impact of the living wage as well as investment in multichannel.

Pets at Home’s VIP Club reached 3.9 million members, up from 3.2 million at the end of the 2015 full year. The retailer said over a quarter of the UK cat population and a third of the UK dog population is now registered on its database. Two thirds of sales involved the loyalty scheme in the half.

Pets at Homes said it is using the scheme to drive incremental revenues in high margin categories, such as advanced nutrition (AN) foods.

The retailer will launch a VIP app in 2016 to allow members to use their smartphones rather than a physical card.

Click-and-collect orders represented 45% of total web sales in the half compared with 23% in the prior year. Pets at Home is trialling in-store kiosks in six stores, enabling customers to shop the wider online range from stores.

Pets at Home said providing innovative products is “vital to improving customer loyalty and visit frequency with engaged pet owners”. It refreshed more than 1,700 SKUs in the first half, representing 22% of its total range. Of those products refreshed, half were private- or own-label.

The retailer opened six Pets at Home stores in the period bringing its total to 405. It opened a further two specialist Barkers dog stores, bringing the total to three, and has 353 vetenery practices after opening 15 in the half. It also opened 10 grooming salons, and now operates 190 overall.

Pets at Home plans over the year to have opened 20-25 Pets at Home stores, five Barkers, 55-60 grooming salons and 50-55 vet practices. It said: “We are investigating the potential for other new store formats which will allow us to infill between traditional Pets at Home retail park locations.”

Pets at Home chief executive Nick Wood said: “Our core strategic drivers remain strong and I am pleased with the progress we have made in the first half of the year.”

Pets at Home said the introduction of the living wage will cost £2-3m per year, although it believes it can mitigate some of the costs through pricing adjustments and ongoing operational efficiencies. The living wage only impacts workers aged over 25 but Pets at Home said it will implement the rate of pay for all colleagues, regardless of age.