Halfords’ boss Jill McDonald is keeping an “open mind” over the size of the retailer’s estate, stressing that 99% of outlets are profitable. 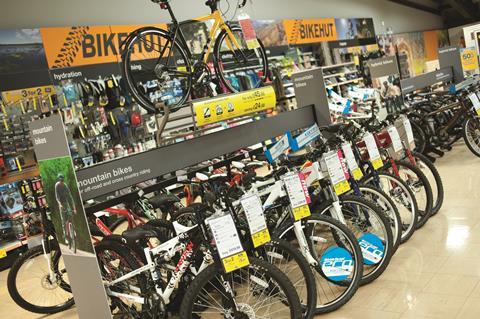 McDonald, who joined the retailer last month from fast-food chain McDonald’s, was speaking to media for the first time in London today, following full-year results.

Analysts had speculated that McDonald would talk about a possible store closure programme, among its 467 shops across the UK and Ireland.

However Halfords chairman Dennis Millard shrugged off the rumours. “We believe we have the right number of stores,” he said.

McDonald later said she had not yet made any decisions about her future strategy. “I have an open mind, but 99% of our stores are profitable,” she said.

Halfords’ stores are still a “very relevant environment”, McDonald added, pointing to the up-selling opportunities when customers come into the store from click-and-collect. Halfords online sales increased 14.3% in the fiscal year. But McDonald added: “I haven’t formed a view yet on the size and shape of the estate.”

Halfords has also been looking to appeal to dedicated cyclists with a more high-end offering through its Cycle Republic stores. The fifth Cycle Republic opened in Nottingham last month and retailer is on track to have a total of 15 this year. However Millard refused to be drawn on how the upscale chain is performing. “It’s still very early days,” he said.

The Halfords executives were also pushed on their efforts to improve customer service levels. McDonald admitted: “We are on a journey, it’s certainly not job done.”