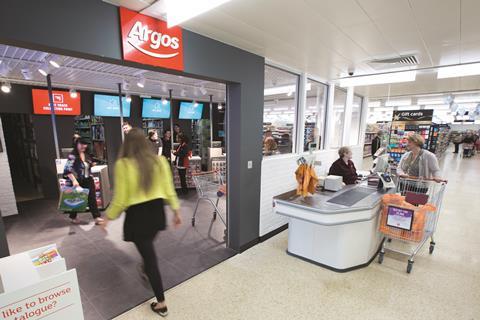 That is an improvement on the 3.9% drop in the first quarter.

Argos said, “as anticipated”, sales of electricals products continued to decline in the second quarter, principally driven by TVs, tablets and white goods. “These declines more than offset a good performance in toys,” said Argos.

John Walden, chief executive of Argos and Homebase owner Home Retail, warned that the outcome of the full year is difficult to predict. “The outcome for the group’s full year generally depends upon the important Christmas trading period at Argos which, this year, seems less predictable than usual due to a less certain promotional environment.”

At sister retailer Homebase, like-for-like sales increased 5.9% with growth recorded across all categories, but particularly in big ticket items, in the 13 weeks to August 29.

Total sales declined 2.8% to £378m as a result of the ongoing store closure programme. The DIY retailer closed eight stores in the quarter, bringing its total to 271.

Homebase gross margins fell by 75 basis points driven by stock clearance activity, together with an adverse sales mix. The decline was partially offset by a reduced level of promotional activity together with the “anticipated impact of favourable currency and shipping costs”.

“Consistent with our previous guidance, Argos’ sales continued to be adversely impacted by the performance of a number of key electrical product categories as well as weaker overall market conditions in August.

“Homebase performed well across its peak trading season, delivering good like-for-like sales growth in both quarters of the first half, while continuing its progress on both its store closure programme and the Productivity Plan more broadly.

“Our teams have made solid progress preparing for this period, including substantially completing the technology and operational steps necessary to introduce new store collection and home delivery propositions to our customers.  We will be making increased marketing and promotional investments to launch these propositions and we expect customers to increasingly embrace them over time.”