WHSmith like-for-likes rise over Christmas: What the analysts say

WHSmith reported a 2% like-for-like rise over Christmas and expects growth to be “slightly ahead” for the year. Here’s the City’s reaction.

“WHSmith continues its serene progress defying the high street slowdown reported elsewhere with 2% like-for-like growth over Christmas contributing to flat like-for-likes over 20 weeks of the first half, and a 5% increase in travel over 20 weeks.

“So far as the longer term prospects here are concerned, management is trying to lower expectations that this performance in the high street is indicative of anything more than its continuing ability to judge its markets and set up to trade successfully by constant resetting of the product offer.

“Gross margin gain in high street to date is lower than previously expected, as WHSmith traded more promotional product within the overall mix”

“To this end the gross margin gain in high street to date is lower than previously expected, as WHSmith traded more promotional product within the overall mix.

“This is most evident in the stationery where like-for-likes grew 5% but gross margins overall were flat.

“In total this strategy makes good sense as stationery, even when promoted, is overall the highest margin part of WHSmith’s mix except food. But for the longer term investors should want this area not to be promoted excessively.

“Within the category mix books were unexceptional and news and impulse performed better than we expected, driven by mix changes in travel as more own-label impulse products were introduced as part of the continuously evolving planned sales mix changes. The Radio Times also sold well over Christmas, amazingly.

“Ahead of today’s Christmas update we had been musing that WHSmith usually likes to save money by reprinting the previous year’s trading statement and so a year ago it’s worth noting that the headline of the statement was ‘Good performance across the group in line with plan’.

“Today the reassuring headline is ‘Good performance across the group’ and a neat-looking box is used for the first time to summarise the key like-for-like sales message, which is that trading was better than expected.

“Importantly, the high street actually saw like-for-likes sales up, by 2%, over the key Christmas season, even though gross margin was up and the cost efficiency programme remained on target.

“Given the strong sales performance in the high street over Christmas period, chief executive Steve Clarke says “we expect profit growth for the year to be slightly ahead of plan”, which is a bit of a turn up for the book and will squeeze the bears of WHSmith this morning.” – Nick Bubb, independent analyst 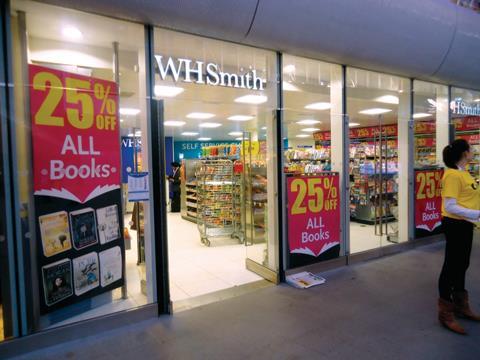 “Travel like-for-likes grew 5% with better-than-expected space contribution to give total sales growth of 12%. Travel continues to benefit from the recovery in passenger numbers and has seen good trading across all channels, according to the company.

“Successful execution of Christmas means high street profits are basically known for the year and attention now turns to travel in the second half.” – Kate Calvert, Investec

“We expect WHSmith to open higher this morning having delivered 2% like-for-like sales growth in the high street division over the 5 weeks to 2 January.

“Like-for-like sales growth in the travel division was also strong at 5%. The strong like-for-like growth seen in the fourth quarter of 2015 (+6%) has thus continued into the first-half of 2016, again driven by growth initiatives such as food-to-go, souvenirs and headphones, as well as by growing passenger numbers.

“The 2% like-for-like sales growth in the peak trading period of the 5 weeks to 2 January is particularly impressive given weak footfall in the UK High Street. It was helped by strong sales of colouring books, seasonal products, and stationery.” – Matthew Webb, JP Morgan

“However, the overlay of the welcome positive like-for-like sales growth within the travel division, based on growth in passenger numbers and the company’s push into the international arena, have served to drive a re-rating of the shares to a premium to the sector.

“The outstanding performance of the high street over the peak period, flying in the face of the footfall decrease on the high street, is an added bonus.” - David Jeary, Canaccord Genuity

“WHSmith has posted a positive set of results, confirming that while its travel arm outperforms its waning high street stores – that have been hardest hit by its ongoing cost-cutting measures – gross margin improvement continued. In this respect, total group sales were up by 4%.

“WHSmith reported pleasing trading at its high street arm over the Christmas trading period. It cites its festive trading success was due to well-received promotions on stationery and seasonal goods, and the ongoing popularity of ‘colour therapy’ books. As a result of this festive success, WHSmith now expects profit growth for the year to be ahead of expectations.

“It is WHSmith’s travel stores that continue to display the standout performance and total sales recorded double-digit growth of 12%, with sales up by 5% on a like-for-like basis.

“WHSmith is expanding this format in the UK and internationally, where it has created a successful retail model that can be applied across the lucrative cross section of travel hubs such as train stations and airports, as well as its hospital stores.

“Its ability to better work its space and ranges has proved fruitful – with its introduction of higher margin souvenirs, travel accessories, and food-to-go at these stores being prime examples.” – Greg Bromley, Verdict Retail

“The high street figures, sales and gross margins were very encouraging with the like-for-likes almost in positive territory.

“However, the earnings gains from the development of the international travel business are, in our view, unlikely to offset the flattening off in ‘high street’ gross margins. There is also likely to be some impact from the ‘living wage’, which is estimated to impact earnings by around £1m.” – Freddie George, Cantor Fitzgerald