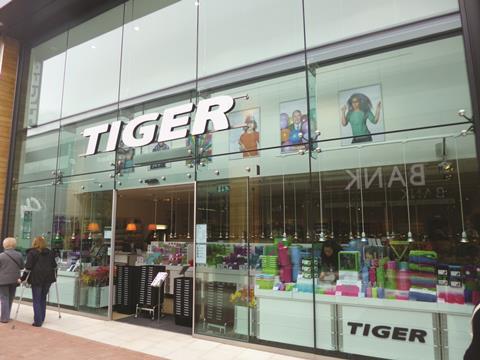 The homewares retailer has been opening at a rate of two stores a week across Europe, prompting sales to soar.

Bosses at Danish parent company Zebra said revenues rose 44% to 2.46bn krone (£234m) in 2014 and pledged to continue opening stores across the Continent as it presses ahead with its ambitious expansion strategy.

Tiger now has 411 stores across 26 countries. Last year the retailer made its first forays into France, Austria, Estonia, the Czech Republic and Cyprus.

But Zebra said more than half of the new Tiger stores it opened last year were in its top five markets of Denmark, Sweden, the UK, Italy and Spain. Combined, the five countries account for about two-thirds of Zebra’s total revenue.

In the UK, Tiger is run as separate entities across the country. Its biggest region, London and the South East, made profits of £4.8m last year as sales soared 45% to £30.7m.

Tiger London and South East chief executive Philip Bier said that the growth had been driven by the rise of middle-class bargain hunters.

Its strategy has seen it open new stores in more premium locations, including Westfield and Richmond.