JD Sports expects profits to come in 10% ahead of expectations after a strong first half in which like-for-likes beat forecasts. 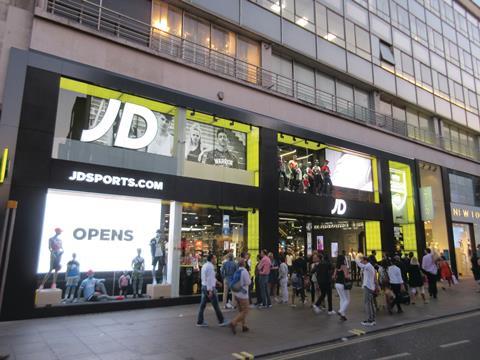 In an unscheduled trading update, JD Sports reported that it had generated “like for like sales in excess of management forecasts”.

Pre-tax profit is now expected to be about 10% above the previous consensus of approximately £110m.

The performance came despite the fact that, as JD had previously indicated, the weakness of the euro affected margin at its European stores.

He said: “We had suspected that trading was strong at JD but hadn’t expected that like-for-likes would stay in double digits.

“Trainers are bang on trend, both in and out of the gym, and JD is taking full advantage of this trend.

“Its exclusive offer of Adidas Originals and Nike trainers is clearly bringing people to the store but JD’s merchandising is amongst the best in the whole retail industry and it is winning market share as well.

“The euro issue only relates to the JD branded stores in Europe. Chausport and Sprinter, which makes most of JD’s overseas EBIT, are not affected. Underlying performance is absolutely fine in Europe.”