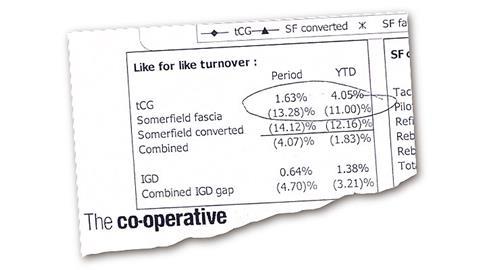 Sales have collapsed at former Somerfield stores since the company’s acquisition by Co-operative Group, raising questions about the wisdom of its £1.5bn takeover.

Overall, the board report reveals that the business is trading £33m below budget for the first two months of its financial year, and almost £25m below budget in the most recent month.

The document - which shows that existing Co-op stores not acquired in the deal grew their sales in both corresponding periods -implies the Co-op is struggling with the integration of the Somerfield stores, and calls into question chief executive Peter Marks’ claim the two businesses were a natural fit.

In March, when Co-op announced its full-year results for 2009, Marks claimed sales from rebranded stores were up 12% year on year, contributing to a 20% rise in operating profit.

A Co-op spokesperson said: “Somerfield was and is trading in line with our expectations. Sales are lower due to a number of integration factors - not least the fact that we have significantly lowered prices since buying the chain.”

At the time of the deal there were concerns that Somerfield’s private equity heritage wouldn’t sit comfortably with the Co-op’s mutual ethos, but Marks has been quick to refute such criticism. When plans for the takeover were announced in 2008 Marks told Retail Week: “I’m not sure there is a cultural difference,” he said. “If you’ve worked in a shop, you’ve worked in a shop.”

However, the spokesperson said: “We have always said integrating two big businesses like this would be a complex matter. Our plan remains to protect the bottom line, while ensuring the best possible value and service for customers.”

There have been major changes in the group since the turn of the year, including the surprise departure of marketing director Debbie Robinson after 20 years in January. The role of trading director, held by David Messom, was also made redundant. Almost all the senior executives from the Somerfield side have left.