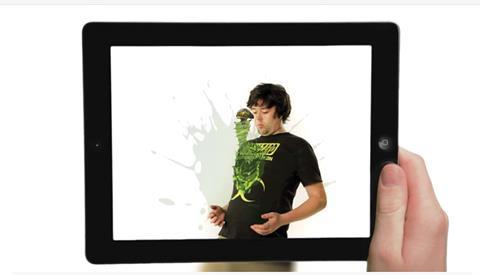 The clothing brand has teamed up with technology company Zappar to launch the T-shirts, which allow consumers to bring images to life by pointing a smartphone at the clothing using the Zappar app.

The range includes an Alien-inspired T-shirt which triggers an image of an extraterrestrial exploding from the chest of the wearer when viewed using a smartphone.

George is selling the T-shirts exclusively for two months. There are five designs in the range.

George has embarked on a strategy to “dial up” its fashion credentials by revamping areas in Asda stores, increasing the number of fast fashion lines and extending its headline sponsorship of Graduate Fashion Week.

Zapparel at George from Zappar on Vimeo.