Store Twenty One staff have laid bare a retailer allegedly unable to pay employees, who say they are trapped and angry due to their precarious employment. 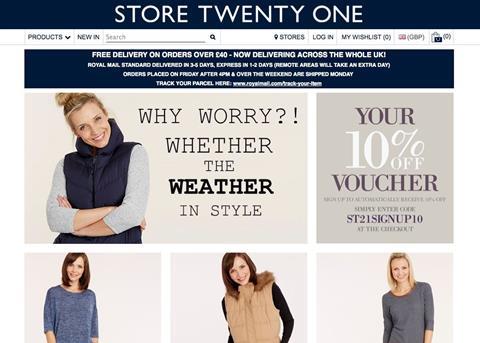 Staff members at the beleaguered fashion chain, which agreed a Company Voluntary Arrangement (CVA) with creditors in late July, claim that they have received their wages piecemeal for months.

Sources said that for the past four months, employees have been told the day before payday that wages will be late.

”The payment of wages differs month to month. Receiving wages piecemeal has been the norm for most of this year and they were even late paying for Christmas”

Retail Week has seen evidence of partial salary payments being made weeks apart, as opposed to a lump sum at the end of the month.

One staff member told Retail Week: “This month we were told we wouldn’t receive any wages and that the company ’hoped’ to pay us next week.

“The payment of wages differs month to month. Receiving wages piecemeal has been the norm for most of this year and they were even late paying for Christmas.

“Payments, for me at least, are usually diced up in halves or thirds or at other times there has been nothing at all but I’ve been offered a ‘sub’ which could be up to a few hundred pounds to tide me over until the full amount can be paid.”

The “subs” generally do not exceed a few hundred pounds. Employees are asked to apply for them, rather than being offered them, and the subs are signed off by management.

“There is a definite unpleasant atmosphere around applying for a sub. It’s something people do in private, put it that way,” said one source.

Wages are no longer paid by Store Twenty One UK parent company Grabal Alok, one source said. Instead they come via transfers from a Bank of India account.

The source said that Store Twenty One’s owner, the Indian conglomerate Alok Industries that is listed on the Bombay Stock Exchange, was “subsidising” the wages of UK staff.

Sources also allege that the company has told staff that those facing redundancy as a result of the CVA will have to seek financial redress from the Government, because the company does not have the funds to pay them.

One person said: “The result is people feel trapped where they work as the company continually owes staff money. It goes without saying that most of us have families, bills and mortgages and the mood in the company is sour to say the least.

“The result has been the unusual situation of workers and senior staff being united on this issue, and directors being wholly vilified for non-payment of salaries.”

Store Twenty One suspended its social media pages because of the backlash from staff, it is claimed. Staff have been asked not to speak to media about the late payment of wages.

Store Twenty One failed to respond to requests for comment.