Staff at Primark’s Belfast store that was gutted by a fire on Tuesday will be paid this week, but have yet to receive longer term security over their futures.

Primark bosses met the store’s staff on Wednesday morning and unions confirmed that workers will receive their wages as planned.

The Usdaw trade union said it had a “very positive meeting” with Primark’s management and was told that answers about workers’ longer term futures would be given next week.

It comes after fire crews were called to the store at 11am yesterday to battle the blaze, the cause of which is currently unknown.

The store is undergoing a major refurbishment, expected to cost £30m. 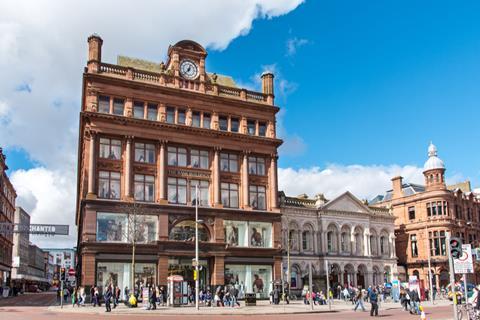 The Bank Buildings have been owned by Primark since 1979

Usdaw union organiser Michala Lafferty told the BBC: “All options are being explored by management to retain their staff, to retain that loyalty and their service.

“We don’t have long-term answers – the company has a short-term solution and that is this week nobody has lost their job and everybody will receive their pay.”

A Primark spokeswoman added: “Following yesterday’s fire at our Bank Buildings store in Belfast, the welfare of our colleagues remains our most important concern and we are fully committed to supporting them during this difficult time.

“Our management team in Belfast are meeting their colleagues over the next few days to provide them with the necessary support and information.

“We are continuing to work with the relevant authorities to determine the cause of the fire.

“We would like to thank everyone for their amazing support during this very challenging time for all concerned.”

The blaze is understood to have started at the top of the five-storey building. No one was injured in the blaze.