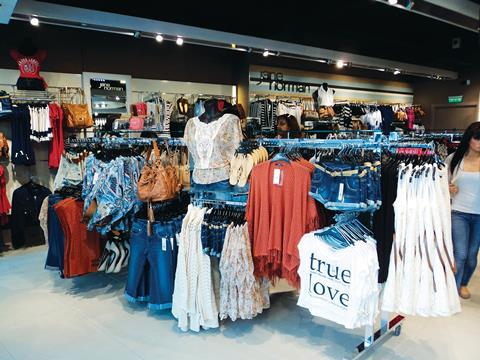 Edinburgh Woollen Mill Group plans to double the number of Jane Norman stores as part of its strategy to revive the brand after acquiring it out of administration in June.

EWM Group chairman and chief executive Philip Day said he wants to add between 50 and 75 stores over the next 15 months to the 63 that it has retained. He also wants to expand the brand internationally and is examining potential new markets in Asia.

He said Jane Norman had become too associated with a younger demographic, but that the brand has a much broader appeal than is widely perceived. “It has been described as a young fashion brand for 15- to 25-year-olds. I disagree. I think Jane Norman is an attitude and Jane Norman is a fit. We supply a customer who’s sexy and sophisticated, has got a great shape and wants to flaunt it.”

Day said that surveys carried out of Jane Norman shoppers showed that the age range of shoppers was between 20 and 50, rather than 15 to 25. “The previous management team got the demographic slightly wrong,” he said.

It already has tie-ups with international partners in the Middle East, the Netherlands, Germany and Ireland, and Day said other markets including China, India, Korea and Japan were under consideration. Having been unable to agree a deal to keep concessions open in Debenhams, it is in talks to open concessions in some House of Fraser stores, although the main focus will be on standalone shops.

The Edinburgh Woollen Mill Group – which is wholly owned by the Day family – has a total of 850 stores and will turn over a total of £450m this year. It was a surprise buyer of Jane Norman, but Day said that it fits the model of company that his business wants to acquire.

“I’ve had my eye on Jane Norman for seven or eight years, I’ve always admired the brand. It’s always delivered massive sales per square foot.” He added that the company – which has also bought the Ponden Mill and Rosebys brands in recent years – is always open to further acquisitions.

“When a business fits the profile and we like it we’re quite prepared to get stuck in, pay a fair price and work on it on a long-term basis.”