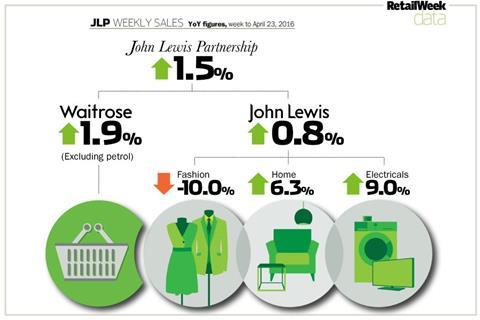 But John Lewis said fashion sales during the period dropped 10%, driven by “matching a competitor’s promotion in the same week last year and the continued cooler April weather”.

Sales in its home department jumped 6.3% compared to the same week last year, as furniture sales posted a 15.8% uplift.

Electricals and home technology sales climbed 9%, “thanks in part to communication technology”, which advanced 26.2%.

“Tablets, computers and mobile phones continue to drive sales in this area,” the retailer added.

Sister retailer Waitrose finished the week with total sales of £126m, up 1.9% year-on-year.

The grocer said the launch of its new advertising campaign “appeared to have a positive effect on sales”.

Cut flower sales spiked 20%, while counter meat and fish sales increased 12% following the screening of its new adverts, which features live footage from its dairy farm near Newbury.

Waitrose Cellar sales grew 53% for the week compared to last year, while the Queen’s birthday celebrations boosted cake sales, which were up 11%, the grocer said.