Matalan will aim to take on value fashion giant rivals on Oxford Street when it opens its first central London store tomorrow. 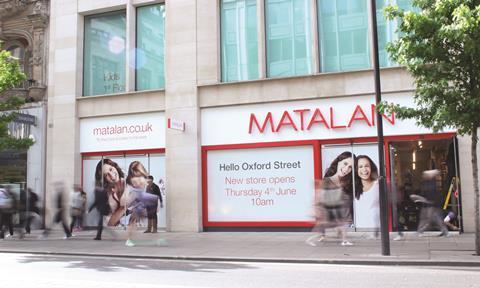 The opening on Oxford Street will put Matalan head to head with the biggest value fashion retailers in the UK on the country’s busiest shopping street.

The new store is situated at 149-151 Oxford Street, close to a 85,000 sq ft Primark store. Other nearby retailers include fashion giants H&M, River Island and New Look.

It is the third city centre store for Matalan following openings in Liverpool and Cardiff. The remainder of the value fashion retailer’s 217 stores are typically sheds situated in out-of-town locations.

Matalan will open the doors of its new Oxford Street store on June 4 2015 at 10am. The 16,131 sq ft store has three floors and will feature womenswear, kidswear, footwear and accessories. The new store is located near the forthcoming Crossrail station which will open in 2018.

Jason Hargreaves, Matalan’s managing director, branded the new store an “exciting milestone”, in light of its other shops being typically located out-of-town. He added: “The new store will provide an easily accessible and enjoyable shopping experience for customers.”

Julien Macdonald, who has designed a range for Matalan, will officially cut the ribbon and open the store tomorrow. The first 50 customers will each receive a voucher to spend in-store worth from £5 to £100.

The retailer is celebrating its 30th anniversary this year. Matalan opened its first store in Preston in May 1985.