Fashion etailer PrettyLittleThing.com, run by the son of Boohoo.com’s founder, has reported a 500% upswing in full-year sales to £30m.

PrettyLittleThing, which sells women’s fashion and accessories, was founded by Umar Kamani, son of Mahmud Kamani, Boohoo founder and joint chief executive. The company said sales increased from £5m in 2014 to £30m this year. PrettyLittleThing did not disclose profits. 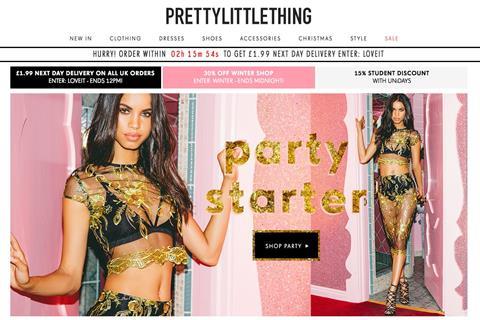 Worn by celebrities such as The Only Way is Essex star Lucy Mecklenburgh, pop group Little Mix and actress Michelle Keegan, the brand has expanded in recent years, with staff levels at its head office in Manchester growing to 300 from 65 last year.

A new office will also be opened next month to support the increase in staff.

PrettyLittleThing said it had invested recently in its merchandising, its warehouse, website and fulfilment.

The etailer reported a ten-times rise in sales over Cyber Weekend compared with 2014 and social media following has now increased to over 1 million.

Boohoo floated last year and reported sales of £90.8m in the six months to the end of August, with pre-tax profits rising 39% to £6.3m. It has 3.5m active customers.