Fashion retailer Blue Inc is to shut a quarter of its stores as it seeks to focus on growth areas including online and international. 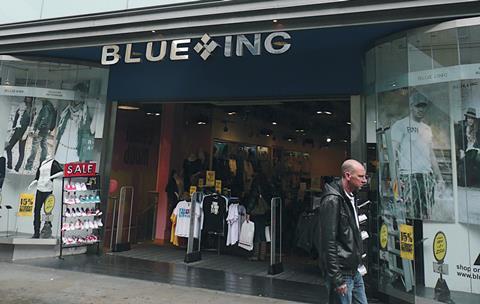 The decision comes amid a shift to online shopping that has piled pressure on retailers with costly, extensive store estates.

Blue Inc boss Steven Cohen told Retail Week the retailer plans to shut 60 to 65 of its 232 shops resulting in the loss of up to 500 jobs.

Cohen said Blue Inc plans to dispose of the leases by “restructuring” a subsidiary, A.Levy & Son. He said one option was putting A.Levy & Son into administration. The company has filed with the courts a notice of intention to appoint an administrator, seen by Retail Week, for A.Levy & Son which gives it 10 days protection.

He said the move to close stores would protect the growth of the retailer by enabling investment in strong areas, including profitable UK stores, online and its overseas and wholesale arms.

The value menswear retailer posted a 3% like-for-like sales increase over Christmas. Online sales surged 52% in the four weeks to January 3.

Cohen said: “Online is becoming an increasingly big part of the business. Given the strength of online and the changing environment on the high street we decided now was the right time to evaluate the store portfolio.

“We’re investing in areas of growth for the future, as well as continuing to support those parts of the retail estate where Blue Inc has a strong customer base.”

A “significant” proportion of the stores earmarked for closure are Officers’ Club shops, said Cohen. Blue Inc acquired that business in 2011.

Cohen said Blue Inc was in a strong position with supportive investors and that the restructure was “sensible” in the current environment.

He was confident about the ongoing growth of online, international and wholesale through brands including Twisted Soul, as well as the core profitable estate.

Retailers in the young fashion market that Blue Inc operates in have found life tough – this time last year both USC and Bank collapsed into administration while Republic shut stores.

“Other competitor action and failures have created a challenging environment”

Cohen said: “Other competitor action and failures have created a challenging environment.” Despite posting the like-for-like sales rise, Cohen said trading over the Christmas period was difficult, and that Blue Inc followed the market by discounting amid warm weather.

“It was highly promotional, we had to engage in promotional activity to grow sales. The unseasonably warm weather wasn’t helpful,” he said. “There was also a bit of caution due to the Paris attacks, especially affecting the larger retail malls and destinations. There was a bit of a fear factor there.”

He added that the retailer also benefited from more “fashion-forward” product and an improved supply chain. The retailer moved some of its production from China to Turkey, increasing Blue Inc’s ability to respond the fast moving lines. It also benefited from a new web platform introduced in February last year.

Blue Inc has grown from 28 stores 10 years ago to 232 stores today. It sells through retailers including Boohoo.com and has four stores across Estonia, Latvia and Lithuania, with plans for more in Russia and the Middle East.