He said that the retailer’s improved product and store environment along with higher staff morale and new hires would drive further growth. 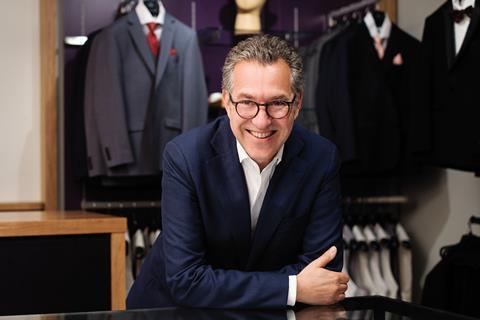 The men’s formalwear specialist reported a 23.1% surge in underlying profit before tax and an 8.2% rise in like-for-likes for the year to January 30.

Brick said: “We are now firmly in growth mode. I have been here seven years and have no intention of going anywhere. I am building the team to support me and take the business forwards.”

Brick joined Moss Bros in 2009 when the retailer was in the doldrums but has turned it into a success story.

“Our store environment programme is working very well,” he said.

Shoppers are more likely to find a refurbished store when they visit now that 81 of the retailer’s 124 branches have been overhauled.

He went on: “Our product is really improving. As business progresses we get more information on product, our hit rate has improved and we get more stock back into lines that are working.”

Product appeal was evident in the retailer’s ability to improve margins by 2.2 percentage points as it resisted the temptation to discount despite a highly promotional environment.

Brick believed customers now think of Moss Bros differently, as a result of store and product revamps and the reduction of promotions.

“We are giving fewer discounts, there is less promotional activity and we are more focused on talking about product values, not about price”

“We have not had a mid-season Sale and we won’t,” he said. “We have some promotions but nowhere near the amount we did.

“Profit is up because of the way we promote ourselves, not because our costs are down – our cost base is up. But we are giving fewer discounts, there is less promotional activity and we are more focused on talking about product values, not about price.”

The strong showing means colleagues are confident in prospects. “We have good morale. Our people are focused – they understand where it’s going. It is all those ingredients working together,” said Brick.

Moss Bros has recently made a number of senior appointments, bringing in Sara Gomez from Direct Line as its new people director and Paula Minowa from Germany-based Strauss Innovation, where she was chief executive, as its chief operating officer.

Debbie Bond joined one month ago as customer director. Current finance boss Robin Piggott will be replaced by Tony Bennett, who held the same position at Charles Tyrwhitt. The appointments will help take Moss Bros to a new stage.

“There is real clarity and all our marketing is around the clarity of each brand. There are no grey areas anymore whereas before there was more grey than anything else”

Brands have also been better differentiated. “Each brand has a very clear identity when it comes to style and fit and price point,” he said.

“There is real clarity and all our marketing is around the clarity of each brand.

“There are no grey areas anymore whereas before there was more grey than anything else.”

The retailer now sells menswear brand Hardy Amies in some stores, alongside other well-known names such as DKNY, French Connection and Ted Baker. Brick said that Moss Bros was “starting small” with Hardy Amies and would “look to bring in other brands where we feel it would be right.”

Brick said that Moss Bros wanted to grow online’s contribution to between 20% and 30%, in line with the rest of the fashion market.

The recruitment of Minowa and Bond will support that ambition. Brick said that Moss Bros now had a single view of the customer and that its website would soon be “fully responsive”.

The performance of Moss Bros gave Brick confidence that the retailer will weather the challenges brought by cost pressures, notably the living wage. He said that Moss Bros was not “thinking redundancies at all” but about how to improve the productivity of its staff.

The rate of like-for-like growth at Moss Bros has slowed since the beginning of the current year. It rose 5.2% in the first nine weeks of the year, compared to 8.2% over the 2015/16 year.

Brick said the rise this year was against a strong comparative last year. “Looking at other numbers from other retailers our figures are still strong.”

As far as Brick is concerned, Moss Bros remains well suited for growth.