Analysis: Mind the Gap – is the fashion retailer next to exit the UK?

Gap decided to close all UK Banana Republic stores this week. Will its main fascia be next? 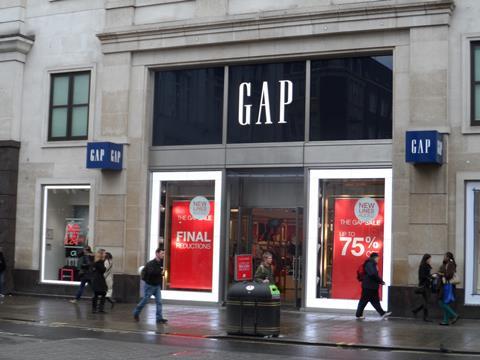 Gap decided to close Banana Republic in the UK this week

Gap has decided to scrap its eight loss-making UK Banana Republic stores. Although the retailer has not given the rationale behind the decision, it is assumed the small operation was distracting the retail giant – the world’s third biggest fashion retailer – from a badly-needed turnaround.

Profits across all of its fascias, which include basics chain Old Navy, fitness fashion specialist Athleta and multi-brand specialist Intermix, fell 27% to £663m during the year to January 30 2015. Like-for-likes dropped 4%.

At Gap alone like-for-likes were down 6%, compared to 5% the previous year.

With Europe accounting for just 5% of Gap’s global sales, could the UK store estate be next for the chop?

And while the group does not disclose its UK figures, in Europe revenue dropped 13% to £575m.

The retailer is striving to turn around this dire situation by reducing prices, stopping discounting and generally making more style-led product.

Banana Republic’s exit from the UK forms part of a larger move to withdraw from unprofitable parts of the business.

The retailer has also closed Gap stores in the US and is closing all 53 Old Navy stores in Japan by the end of this year.

However, since Europe accounts for just 5% of Gap’s global sales, could the UK store estate be next for the chop?

Can Gap be fixed?

First Gap needs to see if its turnaround can work in the UK. Analysts agree that Gap’s many issues can be split into two distinct camps: product and brand.

Many argue that Gap has lost its way on brand identity. “Blue, beige and bland” is how Retail Week stores editor John Ryan described it last year.

Richard Talks Retail analyst Richard Hyman  believes that Gap’s fundamental problem is that it is unable to evolve.

“When the three fascias [Gap, Banana Republic and Old Navy] first came out they were terrific,” he says.

“But they didn’t move with the times. They didn’t have chapter two or three to follow chapter one.”

Gap’s product problem centres on the balance between style and price.

“That is something Gap has struggled to develop. It doesn’t know what its handwriting should look like and so there isn’t a handwriting,” he says.

“And it harms it, because its product is basic. Now there’s not necessarily an issue with basic product, but you can go to a lot of places and get it cheaper than Gap. They need to give people a reason to visit.”

On pricing, Saunders says Gap is “out of kilter”. “Products are the wrong price to start with, which is why they’re always discounting, which devalues the product,” he says.

“Consumers have got used to cheap clothing. If we are going to pay a premium, we need to know why.”

His views are echoed by independent analyst Andrew Busby. “They’re heavy on promotions, which weakens the brand and is a difficult cycle to get out of,” he says.

“And we [consumers] have got used to cheap clothing. If we are going to pay a premium, we need to know why. It needs to be a lifestyle thing, we need a brand identity. Or we will go and pay half the price elsewhere.”

Retail Week Prospect senior analyst Rebecca Marks points to the added pressure retailers face as consumer spend shifts towards experiential and leisure and away from retail.

“The brand doesn’t have a compelling enough collection to entice customers to spend their tightened disposable incomes on their mid-to-premium price points,” she says.

“And the the majority of Gap’s footfall is driven towards its promotional rails and not its full price products, making it imperative that Gap addresses this to prevent further falls in its margins.”

Hyman says that his research shows that in the UK, in the last 52 weeks, Gap has been on full price for just six weeks.

“How can you run a business like that?” he asks. “If you’re a discounter it’s different, but they’re not. No one buys from Gap at full price.”

Beaten by the competition

But while product, price and brand are big problems, when local dynamics are added into the mix things begin to get more complicated for Gap.

While the Japanese retailer over-expanded when it first launched in the UK, Uniqlo has gained traction in recent years with its unique offer and appealing stores.

“The quality for the price is superb,” says Hyman. “And they have injected fashionability into basics. It gives you a reason to buy more basics, even if your old ones have life in them.”

But in the US, Uniqlo hasn’t made the same impact. Instead, Gap’s competition comes from two very different directions.

“What has hurt Gap more in the US is the expansion of H&M and players like J Crew,” says Saunders.

“J Crew is much nicer and better quality than Gap. And because they are constantly discounting you can get a lot of J Crew products for the same sort of price as Gap.”

Another issue in the UK is the cost of Gap’s stores, says Hyman. Uninspiring they may be, but cheap they are not.

“They broke all the [rental] records when they came here, they paid the highest rents per sq ft of any retailer. They didn’t know what they were doing, they were badly advised,” he says.

But to fix local problems you need a local approach and that, many agree, is not something that Gap has entertained or is willing to.

“That’s part of the arrogance of Gap. Gap thinks it knows best”

“A big issue for Gap, and it’s not necessarily the sole source of the problem but it certainly exacerbates it in the UK, is that it does not allow local businesses to have very much control,” says Saunders. “Its global businesses are told how to merchandise stuff and they get very little discretion on pricing.

“And actually that’s part of the arrogance of Gap. Gap thinks it knows best. Well, actually, Gap doesn’t know best. It hasn’t known best for a very long time in its European operations.”

Other global retailers such as H&M or Inditex could be accused of similar levels of head office control over local operations. However, their staff in each territory have greater control over store design and merchandising than Gap, says Saunders, and both have been successful worldwide.

The crux of Gap’s problem is that, even if it fixes brand, product and price – not to mention tired stores and a clunky website – the changes it makes have to resonate in every market.

Currently, because it doesn’t allow local control, its entire strategy is being driven by its US needs. The US is its home market and brings home what little bacon there is, generating nearly 80% of sales.

Could Gap leave the UK?

With no swift resolution likely to repair the UK business, could Gap follow Banana Republic out of Blighty?

Hyman thinks not. “I doubt it’s about to go,” he says. “It’s not been making money for so long, what’s another year to them? I reckon that its losses have never been bad enough, unlike Banana.”

But others believe a Gap departure could be on the cards.“I could see them pulling out of the UK,” says Busby. “I could see that Europe could be a distraction for them.”

“It’s not been making money for so long, what’s another year to them?”

Saunders believes that “it’s certainly something that is at risk”.

“If what they’re implementing does work [in the US] it’s still a very good question of whether it will work for the UK,” he says. “Unless they are going to put local control in place, which I doubt, they are probably going to have to look to shut down the local operation.”

And while UK retailers worry about the impact of Brexit, international businesses are not immune either. Converting sales in sterling back to US dollars will mean Gap’s dwindling figures fall further.

It may seem like a stretch of the imagination to envisage a high street without Gap but, in Britain, it is certainly a possibility unless its turnaround starts to bear fruit.