Footwear retailer Faith has gone in to administration, Retail Week has learned. 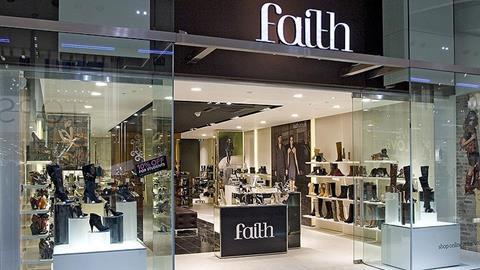 Heath Sinclair, Rod Weston and Mike Wellard have been appointed as joint administrators to the business, which, as Retail Week’s sister title Drapers revealed yesterday, had been teetering on the brink of collapse.

A statement issued by administrators Mazars today said that Faith hit the buffers as a result of being over-leveraged. The administrators are seeking a going concern sale of the business after it went into administration today.

The administrators said that although the business had been marketed for sale for a number of weeks, it could not achieve a solvent sale.

Mazars said it hopes to go forward with the existing sale process and is liaising with parties which have expressed an interest in acquiring the business.

Sinclair said: “We are currently liaising with interested parties in attempt to facilitate a going concern sale. We will be working closely with the businesses’ stakeholders in an effort to preserve a well known retail brand. We are in the process of communicating with all staff, concession partners and suppliers, and will seek to keep them updated as the process develops.”

Yesterday, angry suppliers camped out at the head office of Faith’s owner John Kinnaird threatening to pull stock from stores and concessions and demanding payment for stock after hopes of a sale of the business were dashed.

Unconfirmed reports today said that restructuring specialist Hilco has bought out the £14m of debt of investors and lenders in Faith.

Debenhams, which bought the Principles brand from administration, will be eyeing the Faith situation closely. One source said Debenhams could possible buy the Faith brand to bolster its own-brand footwear offer.