Retail Diary: Seb James is on a Greek odyssey and Morrisons kicks up a stink

Sebastian James pays a visit to his staff in Kotsovolos stores in Greece, Morrisons letter kicks up a stink and SuperGroup’s number is up. 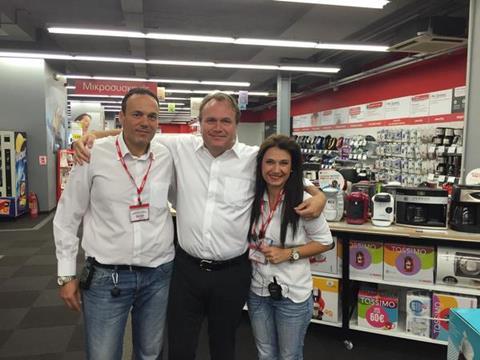 Seb’s men have Kots of heart

The financial woes of Greece have been making headlines across Europe, but Dixons Carphone boss Sebastian James has been spreading cheer among staff at his Kotsovolos stores in the crisis country.

James was in Greece last week and tweeted this picture (above) along with the message: “New sda department in Kiphisias, Athens. Brilliant team is in good heart in difficult circumstances.”

Despite the well-documented problems in Greece, Kotsovolos has resiliently held its own. It’s only a pity that the EU and Greek Government ‘team’ don’t appear to be quite so together.

Morrisons kicks up a stink with letter to young shopper

Morrisons took its drive to improving customer service to a whole new level this week.

The supermarket’s customer services adviser Sarah Sharp wrote to a young shopper who had been tricked by his dad, John Hyde, into thinking there was a special and somewhat unwanted ingredient in shampoo.

John’s son wrote to Morrisons, and he tweeted an image of the written response the youngster received.

It reads: “I know that shampoo has the word ‘poo’ in it, but it’s not real poo. Your daddy was just kidding with you. I’m sending you some pennies for you to buy some really nice smelling shampoo.” Best not get them started on shitake mushrooms…

SuperGroup’s number is up after revealing China expansion plans

But the retailer’s chief executive Euan Sutherland caused amusement this week by revealing that it will have to radically change its range ahead of launching in Asia.

There is a degree of sensitivity over certain numbers, logos and colours in China, with Sutherland noting that the number four is the symbol for death in the country, while the colour white is also associated with death. After all that research and preparation, we’re sure SuperGroup’s sales won’t flatline.