3
In numbers: Nine facts about eBay on the 20th anniversary of ecommerce
eBay

In numbers: Nine facts about eBay on the 20th anniversary of ecommerce

On the day of the 20th anniversary of the first secure online transaction and the birth of ecommerce, Retail Week studies the big numbers from eBay’s history. 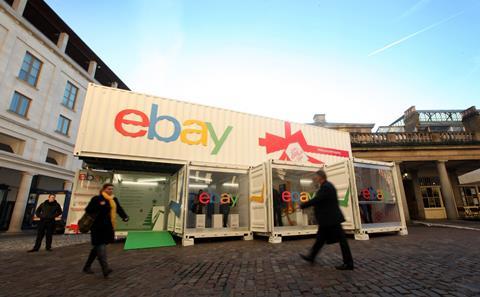 The cost of the first item sold on eBay’s UK site, a three track CD from German rock outfit The Scorpions.

The number of gifts bought on eBay each second last Christmas.

One eBay user paid this amount for Princess Beatrice’s pretzel-shaped royal wedding hat with proceeds going to Unicef and Children in Crisis.

Every seven seconds a pair of shoes is sold via a mobile device.

Over one third of Britain’s adult population visit eBay every month.

The number of businesses and consumers selling products on eBay.

How much the skeleton of a woolly mammoth sold for in 2004.

A Gulfstream II Jet was the most expensive item ever sold on eBay and fetched this sum in 2001.