Sales fell at Waitrose and John Lewis last week as the earlier Easter weekend impacted performance across the partnership. 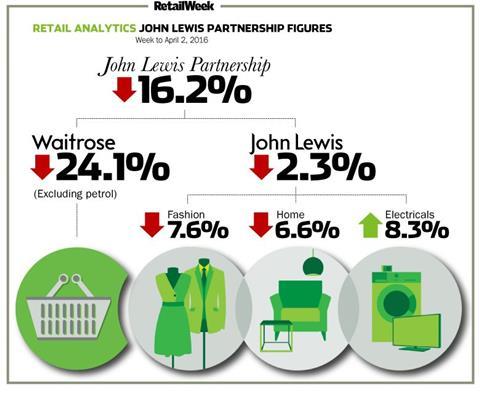 Upmarket grocer Waitrose posted a 24.1% decline in sales to £114.09m for the week ending April 2. However it said “a more meaningful comparison” against 2015’s post-Easter week revealed a 1.8% uplift in sales.

Despite the timing of Easter 2015 providing a tough comparative, Waitrose said promotions drove “strong” sales in some categories, as non-food performed “particularly well” owing to the retailer’s spring cleaning campaign.

Ambient products were hardest hit by the timing of Easter, as sales within that category dropped 28.2% compared to the same week last year.

The impact of this year’s earlier Easter weekend was less stark at John Lewis, where sales dipped 2.3% to £83.33m.

When comparing the two weeks of trade either side of Easter to the same period last year, John Lewis said sales increased 9.4%.

Apple products including the iPad Pro and iPhone helped boost sales in its communication technology category by 22.7%. Vision and large electricals also reported a “good” week, helping sales in electricals, home and technology rise 18.9% over the two-week Easter period.

John Lewis said the lack of comparable Easter trade last week had a bigger impact on its home category, which posted a 6.6% decline in sales year on year.

But big-ticket items performed well as beds enjoyed a 26.7% uplift in sales, while dining furniture advanced 3.7%.