Infographic: John Lewis sales up as shoppers prepare for Easter 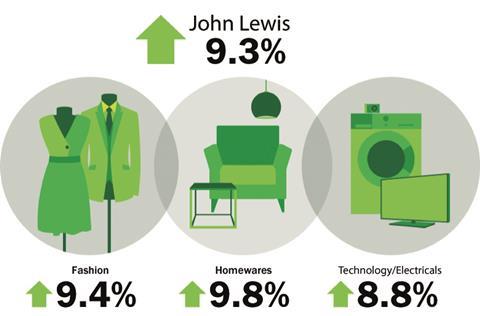 John Lewis sales rose 9.3% in the week to April 5 boosted by a strong Saturday, when sales increased 17.8%.

John Lewis said its Oxford Street and Peter Jones stores recorded double-digit growth. Online sales surged 24.6% driven by its click-and-collect service, which accounted for more than a third of its sales in the week.

The department store retailer said fashion sales jumped 9.3% as customers updated their wardrobes with new season trends in own-brand womenswear and women’s accessories. Demand for hats and bags grew due to women shopping for the Aintree Grand National festival.

Sales in its home department increased 9.8% led by big-ticket items such as beds and fitted furniture. Floor coverings advanced 14% in the week due to John Lewis’ new interest-free credit offer. Gifting lines also grew in the lead up to Easter.

Waitrose said shoppers have been stocking up on sweet treats and gifts as they get ready for Easter and the end of Lent.

Waitrose said seasonal British asparagus and Jersey Royals are making it on to its shelves and it recorded a 41% rise in barbeque meats and a 93% rise in hand-held ice creams. Shoppers also bought 52% more food to eat on the go.