John Lewis’s sales increased 7.9% to £77.6m in the week to October 4 but were hit by clement weather holding back demand for seasonal items. 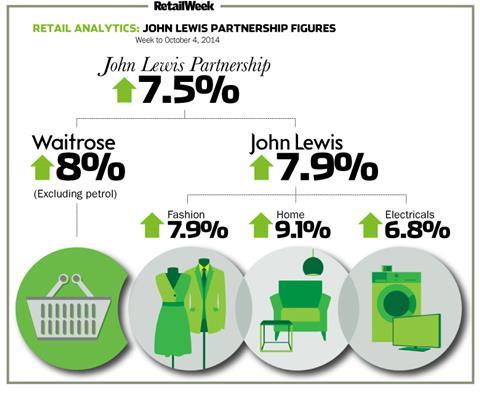 The week ended strongly after it matched a competitor’s promotion and as a result its premium beauty products enjoyed double-digit growth.

During the week John Lewis also opened its Christmas shop to prepare for seasonal trading as customer begin to think about getting ready for the festive season.

Meanwhile, sister retailer Waitrose posted an 8% increase in sales excluding petrol during the period with a warmer start to the week and a cooler weekend reflected in the variety of customers’ purchases.

The month of September was the driest on record and last week customers reached for salads and salad dressing, sales of which were up by 50% and 24% year on year.

Ice cream sales were also strong and increased 19% year on year, while barbecue meats were up by 77%.

Waitrose believes the start of the university term helped it to the strongest week for the sale of sandwiches on record with sales up 21.3% compared with last year.

As the weather cooled, Waitrose recorded a rise in the popularity of warming foods with sales of soups up by 7.7% and mashed potato by 16%.