John Lewis sales increased 4.2% last week after a “lively” start to the week and Waitrose reported a boost from the Great British Bake Off. 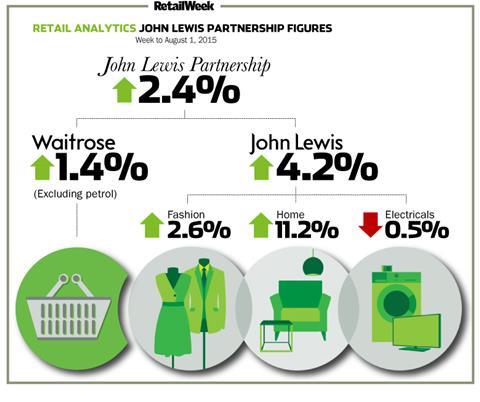 The department store group said trade softened at the back end of the week as the sun came out “and customers enjoyed outdoor activities” over shopping.

Over the first half, sales climbed 3.4%.

Electrical and home technology sales slipped 0.5% “despite a strong week for Vision”, where sales increased 13.1%.

John Lewis retail operations development director Simon Russell said: “Peak holiday season is now upon us and our focus remains on introducing a few surprises for customers with some inspiring new products and propositions, in particular some fantastic new season’s lines which are starting to appear on the website and in our shops.”

Sister retailer Waitrose has delivered sales growth excluding petrol of 1.4% last week and 1.2% in the first half, despite what boss Mark Price labelled “brutal market conditions”.

Price said Waitrose has outperformed the market, won new customers and gained share – which increased 0.1% to 5% in the 12 weeks ending July 19, according to Kantar Worldpanel.

The return of hit TV show The Great British Bake Off is already boosting sales. The first episode aired on Wednesday and in anticipation last week bakeware sales increased by 55% and baking tray sales rose by “an incredible” 881%.

Goods associated with a Sunday roast did well, including frozen meat, and vegetables.