Ashley, who acquired House of Fraser for £90m on Friday, said he was determined to keep stores that had been slated for closure open.

He told The Sun: “In a year’s time, you can hold my feet to the fire on that.” 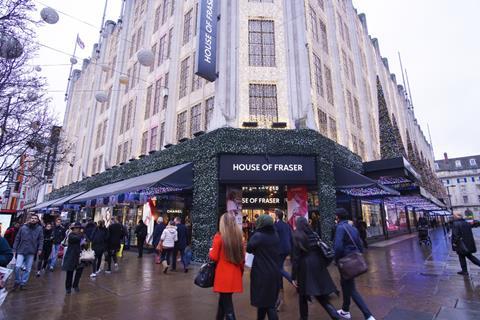 House of Fraser had identified 31 stores for closure

Prior to Ashley’s purchase of the business, House of Fraser executives had engineered a drastic CVA to shut down just over half the stores, battling with landlords to get it approved.

Ashley said he recognised landlords had been hit by multiple retail CVAs in the last year but he wanted to be given “a chance” to keep as many House of Fraser stores trading as he could.

Putting a message to landlords, he said: “Give us a chance and we will try to keep as many open as we can. We are here to get House of Fraser back to where it once was.”

House of Fraser has traded poorly over the last year and was dogged by underinvestment during the time it was owned by Chinese conglomerate Sanpower.

Ashley has spoken about his ambitions to bring House of Fraser into a more upmarket area of the market, badging it the “Harrods of the high street”.

He said: “In Harrods you get some exceptional services. What we would like to do is introduce a ‘concierge click and collect’ at House of Fraser.

“When you go online and say you want to collect goods in-store, you should be able to book a time, book a changing room and book a stylist.

“You get that kind of personal shopping service in a Harrods. There’s no reason why it couldn’t be rolled out nationally across House of Fraser.”

He added that he believed House of Fraser needed more luxury and premium brands to differentiate it in the tough department store market.

He said: “We think the biggest and most important thing House of Fraser is missing is luxury brands. We think it will make a big difference. It is not taking away from House of Fraser but adding to it. If you get the right product, it is not on the shelves for long.”

Ashley, who operates luxury retailers Flannels and Cruise, added that he was considering turning entire House of Fraser floors over to Sports Direct or Flannels.