Sales at John Lewis department stores tumbled by 16.7% to £68m last week as changes to the trading calendar and sunny weather took a toll. 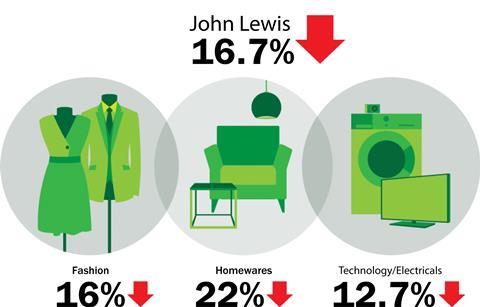 Fashion sales fell 16% in the week to June 21. The electricals and technology category was down 12.7% and home slid 22%.

The only shop that avoided plunging into negative territory was High Wycombe, which was flat, and online sales were down 6.4%.

This year the John Lewis clearance Sale started a week later than it did last year, beginning online on the Wednesday evening and in-store on Thursday.

“As a result, we need to view the combined trading results for this week and next for a more comparable picture,” said John Lewis online director Mark Lewis.

“The shift in our trading calendar combined with warm sunny weather gave a challenging context for trade versus last year for both shops and online.”

The retailer reported that there was nevertheless strong demand for products including women’s accessories and schoolwear – the latter was up 32% – and audio, gaming and small electrical goods.

Sales at sister grocery retailer Waitrose, excluding fuel, rose by 2.5% over the week.

Despite England’s poor performance in the World Cup, sales of products typically bought during the tournament such as pizza and world beers were up 13% and 82% respectively.