Retail sales remained flat on a like-for-like basis during May compared with the previous year as clothing and footwear recorded their worst declines since September. 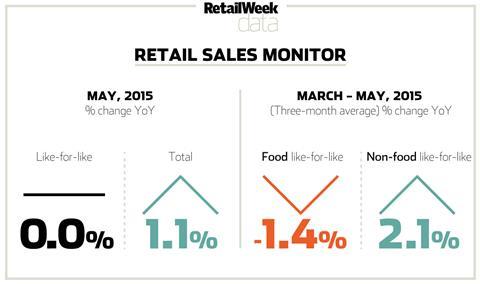 Total sales growth also decelerated in May year on year, rising 1.1%. compared with 2% in May 2014, according to the BRC-KPMG retail sales monitor.

Sales were helped by the furniture market picking up following the Conservatives winning a majority government in May.

BRC director-general Helen Dickinson said: “May witnessed a slow-down in sales growth mainly due to fashion sales, which experienced a decline compared with the same month last year, where we saw record demand.

“Nevertheless, May also had some positive developments. Amongst all categories, furniture performed strongest, an indication of continuing consumer confidence. There was also good news on food: after six months of marginal growth year on year, we are now starting to see a stabilisation in food sales despite the highly competitive market environment.”

The decline in sales of sandals and canvasses due to poor weather drove a shortfall in footwear sales.

“Buoyed by a conclusive result in May’s general election, the housing market picked up leading to standout performances for furniture and homeware sales. As economists predict another housing boom for the second half of 2015, these trends could be set to continue.

“Looking ahead, June may be a tough month of comparables for some with the start of the 2014 World Cup in June last year boosting sales in certain areas. However, with consumer confidence nearing pre-crisis positivity, retailers will be hoping that the improving job market, low inflation rates, along with a dollop of summer sunshine, will provide a welcome boost.”