Retail like-for-likes up 3.2% in March driven by an early Easter

Retail like-for-likes jumped 3.2% in March, driven by Easter falling earlier this year than last and an improved food performance. 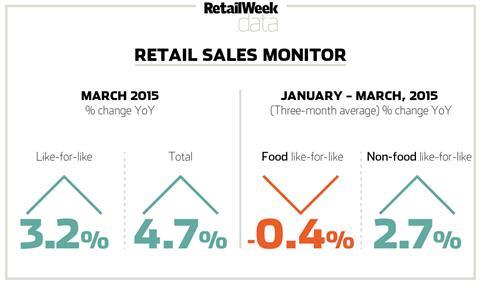 Total food sales reached their highest level since July 2013, rising 1.8% for the three months to the end of March, but were “flattered” by the early Easter weekend, according to the British Retail Consortium (BRC)-KPMG Retail Sales Monitor.

But fashion stores experienced a “subdued” month as colder weather made spring and summer ranges “less appealing” to shoppers.

Sales of dresses bore the brunt of the weather, while jeans, knitwear and childrenswear all sold well.

Furniture was the strongest contributor to growth after food last month, while home accessories and house textiles also put in robust performances.

“Retailers can be satisfied with the consumer response to their Mother’s Day and Easter offerings, but it is important to note that April figures will be impacted by the absence of Easter this year.”

Online sales of non-food products rocketed 12.3% in March compared with the same time a year ago, when sales grew 12.8%. But the three-month average revealed that bricks-and-mortar stores contributed more to growth than online sales – the first time that has happened since August last year.

BRC director-general Helen Dickinson said: “An increase in consumers venturing out to shop can be expected at this time of year and although this period is often difficult to measure due to Easter distortions, we saw a marked increase in sales across home categories including furniture and household appliances, even though fashion sales were a bit subdued.

“All-in-all, retailers can also be satisfied with the consumer response to their Mother’s Day and Easter offerings, but it is important to note that April figures will be impacted by the absence of Easter this year.”

Out of ‘the doldrums’

KPMG head of retail David McCorquodale added: “An early Easter and better economic news helped lift retail sales out of the doldrums in March and the sector posted the strongest sales growth seen in nearly a year.

“While the figures are inflated by the timing of Easter, they are still a welcome boost for retailers who have battled flat or falling like-for-like sales for the last quarter.

“Signs of recovery were also seen in the grocers’ figures, who are mounting a slow but steady fight back. However price deflation continues to dog the sector, and while supermarkets may be selling more, they are peddling hard to stand still.

“Demand is definitely pushing in the right direction, but there is a long way to go before like-for-like food sales are back in positive territory.”