John Lewis sales surged 6.9% last week as the retailer cashed in on a “strong week’s trade” during the half term school holidays. 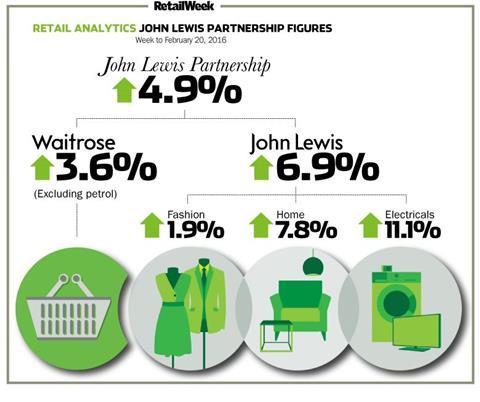 The department store giant’s sales advanced to £75.15m in the seven days to February 20 as shoppers flocked to stores to make big-ticket purchases.

Home sales increased 7.8% with furniture leading from the front, posting growth in both upholstery and beds.

Consumers also snapped up goods in John Lewis’s electricals and home technology category, which posted an 11.1% rise in sales. The retailer said that was driven by demand for Microsoft products and television soundbars.

The performance of beauty and menswear lines drove a 1.9% uplift in fashion, as John Lewis head of retail development Mark Blundell said there were “plenty of reasons to be positive” ahead of Mother’s Day.

Ingredients including dried fruit and nuts were up 81% and 15% respectively, while essences and colourings reported an 8% rise.

Sales of fresh soft fruit grew 11% and frozen fruit advanced 17%, driven by the “increasing popularity” of the Nutribullet.

Waitrose added that cards and gift wrapping sales rocketed 82% on Valentine’s Day and champagne improved 18% as romantics left it late to treat their partners.