John Lewis has reported its biggest sales week of the year to date as the department store group built trading momentum up to Black Friday. 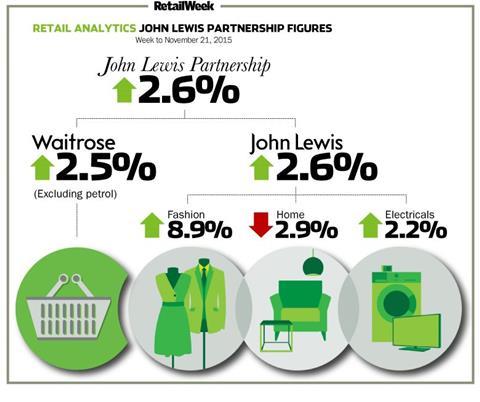 The spike in sales was driven by growth in winter clothing as colder weather gripped most of the UK. Fashion sales were up 8.9%, spearheaded by a 16.6% uplift in men’s outerwear and a 24.7% increase in sales of winter boots. Men’s branded casualwear reported 23.9% growth compared to the same week last year.

“Customers were clearly planning ahead for Black Friday, looking at the products which are available and researching online so they can take advantage of this week’s offers.”

But John Lewis said there were “clear signs that shoppers were planning ahead for Black Friday discounts” and it has already started to match competitors’ offers ahead of today’s promotional extravaganza through its Never Knowingly Undersold commitment.

Its electricals category “performed well”, but demand for TVs and computers slowed as customers held off their purchases in anticipation of cut-price Black Friday deals.

John Lewis director of selling for London and South David Barford said: “Last week was all about the cold weather, with our fashion in particular selling well.

“Customers were also clearly planning ahead for Black Friday, looking at the products which are available and researching online so they can take advantage of this week’s offers.

“John Lewis has prepared well for the day and will participate through our Never Knowingly Undersold commitment and our own range of special offers.”

Despite the colder weather, frozen battered fish enjoyed a 23% increase in sales, while frozen prawns were up 21%.

Wines, beers and spirits also flew off the upmarket grocer’s shelves as myWaitrose customers took advantage of a 10% off promotion to stock up for the festive season.

Spanish wines were the star performer following a 99% increase in sales, while tequila and malt whisky rose 20% and 5% respectively.