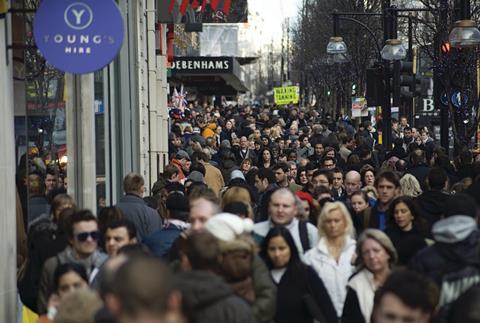 Footfall in January jumped 2% - the first time in a decade that a January increase has been recorded at non-food stores throughout the country.

The increase, which was recorded in figures released by Ipsos Retail Performance today, follows a 2.7% uplift in December.

It is the first time there have been two successive months of growth since the same period in 2014, something Ipsos bosses say could be “a watershed moment” for retail.

The news was revealed on the same day that the British Retail Consortium (BRC)-KPMG Retail Sales Monitor for January showed that like-for-like retail sales rose 0.2% during the month.

Scotland and Northern Ireland was the strongest performing region in January, with year-on-year retail growth up 3.3%.

The North of England and the Southeast and London regions also reported strong footfall increases of 2.1% compared with January 2014.

The statistics were compiled using Ipsos’s Retail Traffic Index, which monitors the number of shoppers visiting more than 4,000 non-food stores across the UK.

Ipsos also predicted that retailers would enjoy year-on-year growth for a third consecutive month in February, although the growth rate is expected to drop to 1.4%.

Ipsos Retail Performance director Dr Tim Denison said: “In years to come we may look back and mark this time as a watershed moment in retailing,

“Store footfall has been dropping since 2007, but the rate of decline appears to have peaked in 2013. Since then the year-on-year gap has steadily narrowed.

“The high street has ridden out the effects of the internet eroding footfall volumes, and should now feel the benefits of an era of true omnichannel retailing beginning to blossom.

“There is no better way to start the year than to report on year-on-year growth in retail footfall across all regions for the first time in over a decade.

“We find ourselves in a very positive position, with interest rates at a record low and deflation a strong possibility, the lowering of fuel prices has been the catalyst to harmonise growth across the country.”