Industry like-for-likes rose 2.6% in January, boosted by the sale of big-ticket items in furniture and home accessories. 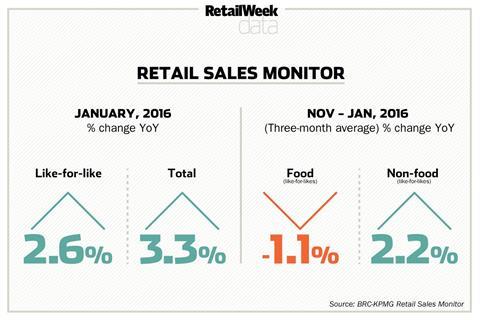 Total industry sales climbed 3.3% in the four weeks to January 30, according to the BRC-KPMG Retail Sales Monitor.

This compares to the same period last year when total sales rose 1.6%, while like-for-likes edged up 0.2%.

Food was the only category last month to see falling like-for-likes.

“January’s performance was driven by big-ticket items, in particular furniture, which is encouraging in the largest month of the year for the category,” said the BRC’s chief executive Helen Dickinson.

“However, the performance in clothing and footwear was driven by the New Year sales.”

Dickinson flagged that it had been the “best performance for retailers since September and ahead of the three and twelve month averages”.

Grocers were hit particularly last month by slow sales of alcohol as shoppers embraced ‘Dry January’, according to the IGD.

Industry online non-food sales grew, up 14.9% in January, compared to a rise of 11.7% in January last year.