Tesco chief executive Philip Clarke has pledged a return to retailing excellence at the grocery giant’s flagship UK business through renewed focus on the customer. 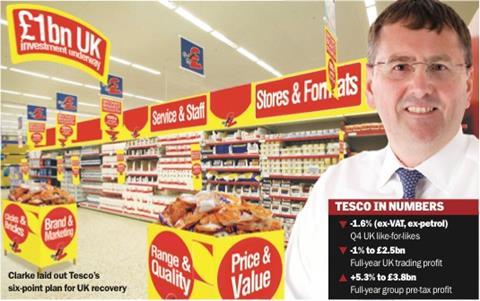 “Good enough is not good enough,” he declared, as he pressed the button on a £1bn investment programme as part of a fight-back designed to ensure Tesco retains its retail crown following share gains by key rivals in recent months.

Clarke said he aims to “bring the business back to where we belong” as he enacts a wide-ranging reinvigoration programme.

He insisted he is taking steps to revive performance in the UK, which he acknowledged was “putting long-term growth at risk”.

Tesco will spend the £1bn war chest improving the shopping experience. £200m will go on staff training, £200m in online development, £200m revamping 430 stores and the rest on branding, marketing, and range and quality improvements.

Clarke said the plan would deliberately “constrain our near-term profitability” but was confident that “as we improve the shopping trip for our customers, it will follow that our sales growth and financial performance will improve too”.

Despite a fall in UK trading profit, Clarke rejected suggestions that Tesco had lost its way. He maintained: “I want to tackle the misconception that Tesco is struggling. We are not. The business wasn’t as good as it could be. Our customers felt it. I felt it. Their expectations have moved on and we haven’t.”

Tesco will focus on core retailing. Clarke said: “We spread a little bit into too many areas, like cars and home services, which we did not know how to do well and proved to be more difficult than we thought.

“They diluted our brand. They cost us time and money and were not able to make a contribution so we stopped them.”

Clarke assumed command in the UK last month after the surprise exit of UK boss Richard Brasher. “It is not ideal but you can only have one captain on the pitch,” he told Retail Week.

He backed the Big Price Drop, which was closely associated with Brasher. He said the maligned promotion was “a great idea”. “It got off to a good start but wasn’t sustained, we have got a lot planned with it.”

Despite slowing down planned space growth by 38% this year, Tesco finance director Lawrie McIlwee backed the under-fire hypermarket model: “Because we were into this game first we have some of the prime locations. They will be strong channels going forward,” he insisted.

Conlumino analyst Matt Piner was encouraged by Clarke’s improvement strategy. He said: “It has a good chance of success. However, as always, execution is key.”

Tesco said it now expects its Fresh & Easy business in the US to break even a year later than hoped for, in the next financial year.

Clarke’s goal is to “deliver the kind of shopping trip our customers desire and that our customers expect”. To achieve this Tesco is trialling improved counters and merchandising; hiring 8,000 new recruits in 750 stores within fresh produce, meat, fish and poultry, beers, wines and spirits; opening four further dotcom stores for online shoppers; rolling out localised prices and promotions depending on demographics; relaunching Tesco Direct to feature a third-party market place; increasing personalisation of Clubcard; as well as relaunching the Value brand, and overhauling its Finest and mid-priced range.