Discounts are poised to soar to an average of 45% at retailers across the UK this weekend – the sharpest pre-Christmas price cuts since 2008.

Discounts are currently at an average of 41.8%, according to business advisory firm Deloitte, as retailers look to offload excess stock following a mild autumn and a slower than expected Black Friday in stores. 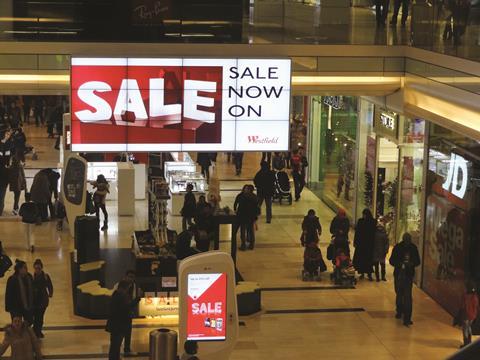 But prices are set to be slashed further during the last weekend before Christmas as retailers prepare for a sales rush.

The predicted average discounts of 45% would represent the fifth year in row that shoppers have enjoyed more money off in the pre-Christmas sales.

Deloitte, which analysed almost 2 million products for sale in the UK, said fashion retailers would be the most aggressive in their cut-price promotions after unseasonal weather and a sluggish Black Friday trading period left many stores lumbered with unsold stock.

The firm’s analysis found that discounts across the wider retail market currently range between 5.6% and 90.9%. It forecast that the discounts will “continue to grow in number and size”, with average discounts of more than 53% expected after Christmas as retailers slash prices in the battle to win customers.

It comes after market research firm Mintel estimated that retail sales in December would jump 4% to £42.6bn following a Black Friday “damp squib,” with “a lot of pent up spending power” poised to come to the fore.

Conlumino said spending on Christmas-specific products alone, including food, seasonal non-food – which includes items such as cards and gift wrap – and gifting would hit £16bn by the end of the year – up 1.3% on 2014.

“Whilst this is good news for consumers looking to grab a bargain, it is a clear sign that retailers are being faced with what is now an annual uphill battle”

Deloitte consumer business partner Jason Gordon said: “Compared to 2014, there is already a noticeable increase in both the volume and value of discounts in the run up to Christmas this year.

“Whilst this is good news for consumers looking to grab a bargain, it is a clear sign that retailers are being faced with what is now an annual uphill battle.

“Consumer buying habits and seasonal weather patterns are no longer sureties in the market. Retailers will have to consider implementing more flexible sourcing and trading strategies to cope with the volatility in demand.”

Gordon added: “Christmas falls on a Friday this year, and, given the disappointing sales so far, we would expect the majority of retailers to launch their final big pre-Christmas discounts on the Saturday before Christmas. Limited Sunday trading hours on the Boxing Day weekend may also lead to slightly deeper-than-usual discounts in the post-Christmas sales window.”