Sales at Waitrose climbed 3.4% last week to £127.5m as shoppers started preparing for the festive season by stocking up on Christmas goods. 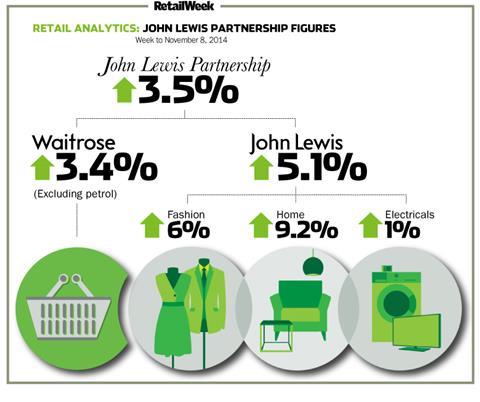 The John Lewis Partnership-owned grocer said the first frost of winter and retailers’ launches of festive advertising campaigns helped trade during a week, which was up against a highly promotional period last year.

Sales of Christmas crackers rose by 14% and stollen was up by 40%. Waitrose has sold 14% more Christmas cakes than it had at this time last year.

Jones said there has been a “huge response” this year to Waitrose’s ‘create your own gift box’.

Sales of the gift boxes are 10 times higher than at this time last year, which Jones said suggests that “personalised presents will be a big theme this Christmas”.

Waitrose launched its own Christmas ad last weekend, which features a girl who makes gingerbread for her school fayre. Sales of gingerbread ingredients have subsequently spiked.

John Lewis, which also usually reports weekly trading on Fridays, has shifted its the timing of its updates to Tuesdays over the Christmas trading period. Retail Week reported on Tuesday that last week sales at the department stores rose 5.1%.